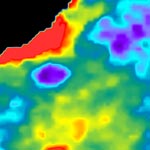 Most of the more than half-a-million deaths caused by cancer each year in the United States result not from the original tumor but from the spread of cancer to new parts of the body, or metastasis. Cancer cells travel from a primary tumor using invadopodia, foot-like protrusions that break through surrounding connective tissue. Invadopodia are driven by protein filaments that repeatedly grow and disassemble. Exactly what guides this cycle was unclear, but scientists suspected a molecule called Rac1 might be involved. A new tool now sheds light on the details.

Researchers led by Louis Hodgson of Albert Einstein College of Medicine developed a fluorescent biosensor that glows wherever Rac1 is active in a cell, and they used it to study highly invasive breast cancer cells taken from rodents and humans. The scientists observed invadopodia form when Rac1 activity was low and disappear when it was high. They then confirmed their findings when they shut down the gene that encodes Rac1 and saw the invadopodia remain intact indefinitely.

This discovery suggests that targeting Rac1 activity with drugs could stop the spread of cancer cells. But a major hurdle remains: Healthy cells, including those that make up our immune system, also rely on the molecule for normal activity. Researchers must find a way to turn off Rac1 in cancer cells without disrupting its function in the rest of the body.