A research team led by Robert Hughes of the Buck Institute for Research on Aging set out to understand how this ripple effect contributes to the breakdown in normal cellular function associated with Huntington’s disease. The scientists used experimental and computational approaches to map a network of 2,141 proteins that interact with the huntingtin protein either directly or through one other protein. They found that many of these proteins were involved in cell movement and intercellular communication. Understanding how the huntingtin protein leads to mistakes in these cellular processes could help scientists pursue new approaches to developing treatments. END_OF_DOCUMENT_TOKEN_TO_BE_REPLACED

of the University of Colorado, Boulder, and others made the finding in the tiny roundworm C. elegans, which scientists have used to study apoptosis and identify many of the genes that regulate the process. While apoptotic cells sent “eat me” signals to PSR-1, injured nerve cells sent “save me” signals to the protein. These SOS signals helped reconnect the broken nerve fibers, called axons, that would otherwise degenerate after an injury. END_OF_DOCUMENT_TOKEN_TO_BE_REPLACED These are perfect interests for a budding systems biologist, which is what Carlson is on her way to becoming. She’s a senior in college on track to graduate this year with a bachelor’s degree in biology from the University of Alaska, Anchorage (UAA). Next, she plans to enroll in a master’s degree program at UAA, and eventually to pursue a Ph.D. in a biomedical field. END_OF_DOCUMENT_TOKEN_TO_BE_REPLACED 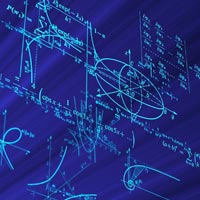 Biologists use math in a variety of ways, from designing experiments to mapping complex biological systems. Credit: Stock image.

On Saturday (at 9:26:53 to be exact), math lovers and others around the world will celebrate Pi—that really long number that represents the ratio of the circumference of a circle to its diameter. I asked our scientific experts why math is important to biomedical research. Here are a few reasons.

Want more? Here’s a video with 10 reasons biologists should know some math. REM occurs several times throughout the night, interspersed with other sleep states collectively called non-REM sleep. Although REM is clearly necessary—it occurs in all land mammals and birds—researchers don’t really know why. They also don’t understand how the brain turns REM on and off. END_OF_DOCUMENT_TOKEN_TO_BE_REPLACED

To help the public better understand how measles can spread, a team of infectious disease computer modelers at the University of Pittsburgh has launched a free, mobile-friendly tool that lets users simulate measles outbreaks in cities across the country.

The tool is part of the Pitt team’s Framework for Reconstructing Epidemiological Dynamics, or FRED, that it previously developed to simulate flu epidemics. FRED is based on anonymized U.S. census data that captures demographic and geographic distributions of different communities. It also incorporates details about the simulated disease, such as how contagious it is.