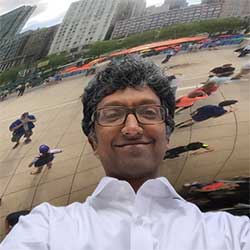 In a way, Janarthanan Jayawickramarajah is like an architect. But rather than sketching plans for homes or buildings, he creates molecules designed to detect and destroy cancer cells.

From Sri Lanka and Bahrain to the southern United States, wherever he lives or travels, he always finds scientific inspiration in architecture. In 2014, he and his family saw towering mosques and winding palaces in Istanbul, Turkey. “It was amazing to see these really old buildings that were created when technology was so limited,” he says. “It motivated me to work hard and think inward, not about making architectural structures but complex biological ones.”

Unlike traditional chemotherapy that leads to uncomfortable side effects by slowing the growth of healthy cells along with cancer cells, Jayawickramarajah’s “smart molecules” are designed to shut down cancer cells while leaving the healthy ones untouched.

Jayawickramarajah and his research team build smart molecules by joining together a small piece of DNA with a cancer-fighting synthetic molecule. Here’s how they envision it will work: Outside of a cancer cell, the smart molecule will remain inactive, with the synthetic portion tucked neatly away. Once inside a cancer cell, the DNA portion will attach to a specific microRNA, a tiny molecule that plays a big role in tumor growth. The microRNA will then act as a switch that changes the shape of the smart molecule. In the new configuration, the synthetic portion will become exposed and attach itself to proteins vital to the cancer cell’s survival, shutting them down.

The team has already created smart molecules that can do exactly this in an environment that simulates a cancer cell. Their next step is to test their design in real cells. Jayawickramarajah hopes that the molecules he constructs may one day contribute to new cancer treatments that target tumor cells directly, without any unwanted side effects.