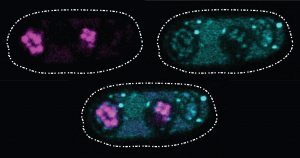 These glowing images of yeast (Schizosaccharomyces kambucha) reproductive cells show an example of a selfish gene at work. Here, the selfish gene boosts its chances of being passed to the next generation by producing both a toxin (stained cyan) and an antitoxin (stained magenta). Cells with a copy of the selfish gene are protected by the antitoxin, left and bottom ovals. Those without the selfish gene are destroyed by the toxin. Scientists suspect that selfish genes could be operating throughout many organisms’ genomes, possibly having a major impact on how genetic material is inherited over generations. Credit: Image courtesy of María Angélica Bravo Núñez and Nicole Nuckolls.

There’s an old saying that rules are meant to be broken. In the 1860s, Gregor Mendel found that each copy of a gene in an organism has an equal chance of being passed to the next generation. According to this simple rule, each version of a gene gets passed to offspring with the same frequency. The natural selection process can then operate efficiently, favoring the genes that produce an advantage for an organism’s survival or reproductive success and, over successive generations, eliminating genes from the gene pool that bring a disadvantage.

Of course, the way organisms inherit genes is not as straightforward as Mendel’s work predicted. In natural systems, inheritance often fails to follow the rules. One culprit scientists are identifying again and again are what are called “selfish genes”: one or more genes that have evolved a method of skewing inheritance in their favor.

Scientists refer to these selfish genes—which are often complexes of multiple genes working together—as “selfish” because they enhance their own transmission to the next generation, sometimes by killing off any of the organism’s reproductive cells that lack copies of those genes. Using a variety of techniques, the genes are effective at passing themselves on to future generations. However, their methods set up a conflict within the organism by damaging its fertility; overall, fewer reproductive cells or offspring survive to produce a new generation.

Selfish genes are a challenge for scientists to identify, but researchers say that knowing more about these genes could help explain a range of genetic mysteries, from causes of infertility to details on how species evolve. The methods these genes use could also be harnessed to help control the reproduction of certain populations such as mosquitos that spread disease.

One recently described selfish gene system is found in the yeast cells pictured above. Sarah Zanders

and her colleagues at the Stowers Institute for Medical Research in Kansas City, Missouri, and the Fred Hutchinson Cancer Research Center in Seattle, Washington, study selfish gene systems in yeast to understand how common they are and how they affect a species’ fertility and evolution. “Usually we think about infertility stemming from the good guys failing. For example, a gene that normally promotes fertility could be mutated so that it can no longer do its job,” says Zanders. “But selfish genes are another potential source of infertility. Learning general principles about selfish genes in simple models will guide future searches for selfish genes that could be contributing to human infertility.”

Recently, the scientists discovered a single selfish gene, wtf4, that encodes both a toxin and an antitoxin protein. When yeast produce their reproductive cells, called spores, the wtf4 toxin protein is released into the immediate vicinity, but the antitoxin remains inside spores that contain a copy of wtf4. The toxin destroys all the spores that don’t have the antitoxin protein. Although the yeast has fewer spores—and therefore reduced fertility—each spore carries wtf4, ensuring that the gene will be passed to the next generation of yeast. END_OF_DOCUMENT_TOKEN_TO_BE_REPLACED

END_OF_DOCUMENT_TOKEN_TO_BE_REPLACED

Although not as well-known as other medical conditions, sepsis kills more people in the United States than AIDS, breast cancer, or prostate cancer combined. Sepsis is body-wide inflammation, usually triggered by an overwhelming immune response to infection. Though doctors and medical staff are well-aware of the condition—it is involved in 1 in 10 hospital deaths—the condition is notoriously hard to diagnose. In this video, sepsis expert Sarah Dunsmore, a program director with the National Institute of General Medical Sciences (NIGMS), describes what sepsis is and how to recognize it, what kinds of patients are most at risk, and what NIGMS is doing to reduce the impact of this deadly condition.