We fund many scientists who are developing and applying cryo-EM to bring the details of biological structures into unprecedented focus. Here are two examples of their work and its potential impact. 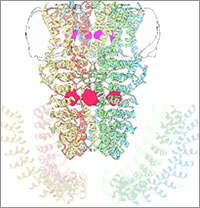 You can thank the TRPA1 protein for that satisfying burn you feel when you taste a bite of sushi topped with wasabi. Known informally as the “wasabi receptor,” this protein forms pores in the membranes of sensory nerve cells. When we encounter pungent chemical irritants like wasabi or mustard oil, the pores open, which then triggers a warning response that we feel as a tingling or burn. The wasabi receptor also triggers pain in response to chemicals produced within our own bodies when our tissues are damaged or inflamed.

A team led by Yifan Cheng and David Julius at the University of California, San Francisco, used cryo-EM to reveal the structure of the wasabi receptor at a resolution of about 4 angstroms (a credit card is about 8 million angstroms thick). This detailed structure can help scientists understand both how we feel pain and how we can limit it by developing therapies to block the receptor. 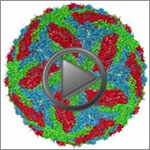 Dengue virus is a mosquito-borne illness that infects millions of people in the tropics and subtropics each year. Severe cases can result in hemorrhaging and become life-threatening. Like many viruses, dengue is enclosed by a protective membrane. The proteins that span this membrane play an important role in the life cycle of the virus.

Hong Zhou at the University of California, Los Angeles, and colleagues used cryo-EM to determine the structure of a dengue virus at a 3.5-angstrom resolution—close enough to reveal how the membrane proteins undergo major structural changes as the virus matures and, ultimately, infects a host. Understanding the precise 3-D shape of these proteins could help scientists develop therapies to block their function and prevent infection.