What looks like a colorful pattern produced as light enters a kaleidoscope is an image of a cell infected with respiratory syncytial virus (RSV) illuminated by a new imaging technology. Although relatively harmless in most children, RSV can lead to bronchitis and pneumonia in others. Philip Santangelo

of the Georgia Institute of Technology and Emory University, along with colleagues nationwide, used multiply-labeled tetravalent RNA imaging probes (MTRIPS) to observe the entry, assembly and replication of RSV inside a living cell. Once introduced into RSV-plagued cells, the MTRIPS latched onto the viral RNA (in the image, red) without altering the level of infectivity. This led to fluorescent RSV viral particles that let the researchers track the viral RNA in host cells and better understand what the virus was doing. The knowledge gained from this new technique might aid in the development of RSV antiviral drugs and possibly a vaccine. Scientists could also one day use the imaging approach to study other RNA viruses, such as the flu and Ebola. 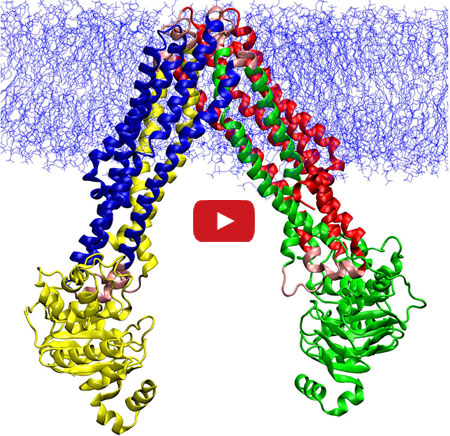 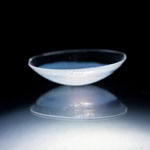 An experimental contact lens design releases a glaucoma medicine at a steady rate for up to a month. Credit: Peter Mallen, Massachusetts Eye and Ear Laboratory/Kohane Laboratory, Boston Children’s Hospital.

Like a miniature donut stuffed inside a tiny pita pocket, a common glaucoma medicine held within a biomaterial ring is sandwiched inside this contact lens. In laboratory experiments, the lens, which can also correct vision, releases the eyesight-saving medication at a steady rate for up to a month. Its construction offers numerous potential clinical advantages over the standard glaucoma treatment and may have additional applications, such as delivering anti-inflammatory drugs or antibiotics to the eye. Led by Daniel Kohane and Joseph Ciolino at Harvard Medical School, the researchers who developed the lens are now gearing up to test its effectiveness in additional laboratory studies. They hope a Phase I clinical trial to evaluate the safety and ability of the lens to reduce pressure in the human eye could begin in about a year.

This work also was funded by NIH’s National Eye Institute. In college, as a pre-med student majoring in biology and chemistry, Dave Cummings grew frustrated with the traditional “cookbook” approach to doing labs in his science classes. Turned off by having to follow step-by-step lab procedures that had little to do with scientific discovery, Cummings changed his major to English literature. Studying literature, he says, “helped me find myself” and taught him to think critically.

Ultimately, Cummings says, “I came to realize that it wasn’t the practice of medicine that got me excited, but the science behind it all.” He decided to pursue a graduate degree in biology and—after “knocking on a lot of doors”—was accepted at the University of Idaho, where he earned his master’s and doctoral degrees and discovered his passion for microbiology.

Today, Cummings applies his critical thinking skills to his work as professor of biology back at his alma mater, Point Loma Nazarene University (PLNU), a small university focused on undergraduate education. There he studies the role of urban storm water in spreading genes for antibiotic resistance in natural environments, and pursues his enthusiasm for training the next generation of scientists. He enlists his students in his research, giving them what he calls “real, live, on-the-ground” research experience that relatively few undergraduate students at larger universities receive.

Antibiotic resistance, which can transform once-tractable bacterial infections into diseases that are difficult or impossible to treat, is a major public health challenge of the 21st century. The most common way that bacteria become drug resistant is by acquiring genes that confer antibiotic resistance from other bacteria. Often, such drug resistance genes are found on small, circular pieces of DNA called plasmids that are readily passed from one species of bacteria to another.

Cummings and his students examine sediment samples from these wetlands in search of plasmids that carry resistance genes. They’ve found that during winter rains, the San Diego wetlands receive runoff containing antibiotic-resistant bacteria and plasmids, which can persist at low, but detectable, levels into the dry summer months.

“We know that urban storm water carries with it a lot of antibiotic-resistant bacteria, and along with that the DNA instructions [or genes] that code for the resistance,” says Cummings. “We have solid evidence of genes encoding resistance to clinically important antibiotics washing … into coastal wetlands in San Diego.”

“We’re trying to understand the scope of the problem, and ultimately what threat that poses to human health,” he says. His concern is that the drug-defying bacterial genes will accumulate in the wetlands, and then “[find] their way back to us, where they will augment and amplify the problem of resistance.”

Precisely how resistance genes might move from the environment into people is not yet known. One way this could occur is through direct contact with contaminated water or sediment by anglers, swimmers, surfers and other recreational users. Fish, birds and insects could also transmit resistance genes from contaminated wetlands to humans.

“There is good evidence elsewhere that birds are important vectors of drug-resistant pathogens, and this is my favorite possibility,” says Cummings. “Hopefully someday we can test that hypothesis.”

Cummings’ studies, done in collaboration with Ryan Botts at PLNU and Eva Top at the University of Idaho, could reveal antibiotic resistance genes with the potential to move into new species of disease-causing bacteria and back into human populations. By identifying these genes and raising awareness of the problem, he hopes to aid future efforts to mitigate the spread of antibiotic resistance. 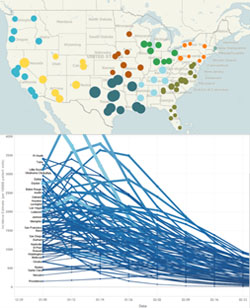 News articles this weekend reported an uptick in flu cases in many parts of the country. When will your area be hardest hit? Infectious disease experts at Columbia University have launched an influenza forecast Web site

that gives weekly predictions for rates of flu infection in 94 U.S. cities. The predictions indicate the number of cases in Chicago; Atlanta; Washington, D.C.; and Los Angeles will peak this week, with New York City, Boston, Miami and Providence peaking in following weeks. The forecasts are updated every Friday afternoon, so check back then for any changes.

The forecasting approach, which adapts techniques used in modern weather prediction, relies on real-time observational data of people with influenza-like illness, including those who actually tested positive for flu. The researchers have spent the last couple of years developing the forecasting system and testing it—first retrospectively predicting flu cases from 2003-2008 in New York City and then in real time during the 2012-2013 influenza season in 108 cities.

“People have become acclimated to understanding the capabilities and limitations of weather forecasts,” said Jeffrey Shaman

, who’s led the flu forecasting project. “Making our forecasts available on the Web site will help people develop a similar familiarity and comfort.” Shaman and his team are hoping that, just as rainy forecasts prompt more people to carry umbrellas, an outlook for high influenza activity may motivate them to get vaccinated and practice other flu-prevention measures.

This work also was funded by NIH’s National Institute of Environmental Health Sciences.