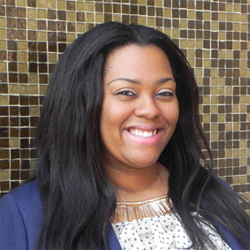 A single, life-defining moment is what often influences our choice of career paths. But for Sharon Cobb, three significant events empowered her to want to produce a change in society for those affected by health disparities.

First, in high school, she was offered the chance to shadow an OB/GYN nurse practitioner at King/Drew Medical Center in Los Angeles. There, Cobb saw firsthand the need for health care among some of the city’s most vulnerable residents and the challenges involved in delivering that care. This experience led her to pursue a career in nursing.

Second, sadly, two of her friends took their own lives, sparking her interest in mental health and depression. “We don’t discuss depression and mental health in the African American community. And I know both these friends probably would have benefitted from help,” she says.

Third, while Cobb was completing her master’s in nursing at Charles R. Drew University of Medicine and Science, she heard about a new program at the school called Bridges to the Doctorate, which aims to increase the pool of doctoral degree students from underrepresented groups. She applied and became one of the program’s first participants.

Cobb is now pursuing a Ph.D. at the University of California, Los Angeles, School of Nursing. Motivated by her interests in health disparities and improving the care of vulnerable populations, she recently conducted a pilot study on pain attitudes and beliefs among older African Americans in the Los Angeles area. She found pain to be prevalent and the results solidified her research focus: understanding the relationship between pain and obesity among aging African Americans. By uncovering their experiences, Cobb hopes to find ways to increase the quality of life and well-being in this population.

Why this particular group of subjects? In her pilot study on pain attitudes and beliefs among older African Americans, many of her participants were overweight and obese. She wondered: Are these adults managing pain with food or inactivity?

“Health care professionals don’t know a lot about older African Americans living with pain,” Cobb says. “In my preliminary data gathering, I found that 20 percent reported anxiety and depression. These individuals are, oftentimes, managing their pain with alternative methods because they are concerned about opioids and addiction.”

Cobb is also finding that the word “depression” has its own stigma. “When I used the standard scales for measuring depression and stress, I found that most African Americans will say they are happy and get offended when you suggest they may be depressed, despite having all of the symptoms,” she says.

Cobb also discovered that many of the individuals in her study had a fatalistic view of pain. “For them it is something that is just inevitable and part of their daily experience,” she says.

Cobb believes her research can make a long-term difference for providing care in this population. “I am hoping that years from now, I will have shown the tie between chronic pain management and weight and depression, and that my work will add to the literature on how to treat this population. Health care providers need to find a way to assess pain and effectively treat their patients.”

There is a cost factor to this issue as well – statistics show that 51 percent of older adults that check in to an emergency department report chronic pain as their primary concern. Ideally, Cobb would like to partner with the county hospitals because a large number in her identified population receive their care through Medicare and Medicaid.

While the journey may ultimately be long, for Cobb, the path is clear and she is excited about the road ahead.

Laura, a guest contributor, is the director of communications for the UCLA School of Nursing. She is a writer and storyteller committed to championing the portrayal and image of nursing.