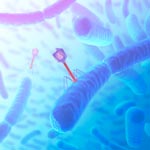 Bacterial cells can be infected by viruses (shown in red and purple) and have evolved ways to defend themselves. Credit: Stock image.

Like humans, bacteria can be infected by viruses and have evolved ways to defend themselves. Researchers are now adapting this bacterial “immune system” to precisely and efficiently edit genes in cells from humans and a wide range of other organisms. Scientists are excited about the tremendous potential of this powerful tool for advancing biomedical research and treating diseases.

The bacterial defense system is called CRISPR, for clustered regularly interspaced short palindromic repeats. A breakthrough in understanding CRISPR came from examining bacteria used by the dairy industry for the production of yogurt and cheese. In a study published in 2007, researchers showed that these bacteria insert viral DNA sequences into their own genomes and use that information to disarm the virus when it attacks again. Subsequent research has shown that the CRISPR system consists of small RNA molecules that target specific viral DNA sequences and proteins that cut the DNA, thus destroying the virus.

Researchers have already adapted CRISPR into a gene-editing tool that’s quicker, cheaper and more precise than existing methods. Researchers can use CRISPR to add, delete, rev up or tone down certain genes as well as create animal models for studying human diseases. The ability to precisely target genes in human cells is expected to speed progress in the development of gene-based therapies.

Although much is known about CRISPR, we still have a lot to learn. For example, how do bacterial cells obtain and insert the viral DNA into their genome? What triggers production of the CRISPR RNA molecules? How are invading viral DNAs targeted for destruction? This last question is answered in part by a pair of findings described in an earlier post, A Crisper View of the CRISPR Gene-Editing Mechanism. We also want to figure out how we can make the CRISPR gene-editing tool even more versatile and precise.

The CRISPR story offers a good example of how studying basic biological processes leads to new—and sometimes unexpected—insights and applications.