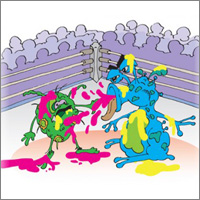 Bacteria hold a vast reservoir of compounds with therapeutic potential. They use these compounds, known as secondary metabolites, to protect themselves against their enemies. We use them in many antibiotics, anti-inflammatories and other treatments.

Scientists interested in developing new medicines have no shortage of places to look for secondary metabolites. There are an estimated 120,000 to 150,000 bacterial species on Earth. Each species is capable of producing hundreds of secondary metabolites, but often only under specific ecological conditions. The challenge for researchers is figuring out how to coax the bacteria to produce these compounds.

Now, Brian Bachmann and John McLean of Vanderbilt University and their teams have shown that by creating “fight clubs” where bacteria compete with one another, they can trigger the bacteria to make a wide diversity of molecules, including secondary metabolites.

They found that Nocardiopsis produced a greater quantity and variety of biological molecules when competing with each of the other species than when growing alone.

The SOMs revealed that one secondary metabolite that the scientists named ciromicin (after a Latin word meaning war/cite/disturb/invoke) was produced by Nocardiopsis only when it grew with another bacterial species called Rhodococcus wratislaviensis. The scientists suspect ciromicin may have therapeutic value because it is similar in shape to several FDA-approved antibiotics and, in laboratory studies, has shown the potential to limit tumor growth.

Bachmann and McLean are hopeful that the techniques they developed will help identify many more secondary metabolites with promising therapeutic potential.