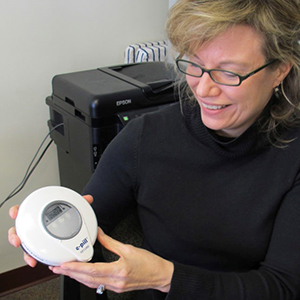 Vermont Center on Behavior Health’s Stacey Sigmon with the tamper-proof buprenorphine delivery device she used in her NEJM study.

In another attempt at alleviating the crunch in treatment capacity, the Vermont Center is preparing to launch a pilot experiment to deliver medication-assisted treatment in the emergency department. Patients presenting opioid misuse issues—e.g., overdose, swelling from using contaminated needles—would get immediate treatment and continue returning to the ER for treatment until a slot opens up at an opioid clinic.

In a different study, Higgins and Sigmon, along with University of Vermont colleagues, addressed another problem associated with opioid misuse—in utero exposure. Nearly 80 percent of all pregnancies in opioid-addicted women are unintended. Higgins and Sigmon found that financial incentives paired with strategies that reduce barriers to introducing contraception—providing contraception without requiring a physical exam and supplying it during the initial visit—greatly increased birth control adherence.

The West Virginia Clinical and Translational Science Institute (WVCTSI), funded by an IDeA Clinical and Translational Research (CTR) award, strives to bring the best care possible to residents, many of whom live in rural communities. WVCTSI concentrates on five priority health areas, including addiction and resultant emerging epidemics such as hepatitis B, C, and HIV.

Because opioid overdoses have hit West Virginia particularly hard in recent years, WVCTSI has placed a special emphasis on the study of opioid use disorder (OUD), medically assisted treatment for OUD, and emerging epidemics resulting from OUD.

“The IDeA-CTR is a major stimulus to build research infrastructure that will impact health outcomes in West Virginia, including individuals with OUD,” says WVCTSI director Sally Hodder, M.D.

WVCTSI takes a broad approach to studying opioid addiction, with research in the following areas:

Public health. Approaches include using large databases of electronic medical records to model overdose risk and factors that predict overdose deaths. The CTR has also funded focus groups in five communities across West Virginia. The sessions have hosted up to 20 community stakeholders to discuss underrecognized insights about the opioid crisis and to share deeper strategic concepts that might not otherwise come to the surface. “The idea is that opioid addiction may take a slightly different form in every community,” says Hodder. “And it will be interesting to see what similarities and differences there are among these communities, and what we can learn from them.”

Laboratory science. The CTR has been working with a group of multidisciplinary investigators to shift treatment standards for OUD toward precision medicine. Ongoing studies include investigating opioid misuse in pregnancy as well as genetic variants in mothers and newborns that inform the health of babies born with neonatal opioid withdrawal syndrome (NOWS). In an effort to understand the long-term effects of prenatal opioid exposure on cognition, language, and emotional regulation, CTR researchers at Marshall University School of Medicine perform psychiatric evaluations and cognitive testing of children born with NOWS. (To learn more about NOWS, read this story

from the PBS NewsHour that was funded in part by NIGMS’s Science Education Partnership Award (SEPA) program.) 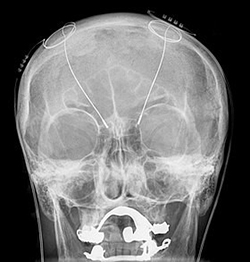 Clinical science. The CTR supports novel strategies to treat OUD. In collaboration with Ali Rezai, a neurosurgeon at West Virginia University, the CTR is gearing up to assess deep brain stimulation (DBS) for treatment-resistant OUD. DBS has previously been used to successfully treat neurological conditions such as Parkinson’s disease, epilepsy, obsessive-compulsive disorder, tremor, and dystonia. In this case, Rezai and his team would implant stimulating electrodes in the brain to modify activity in the nucleus accumbens, a region heavily involved in the brain’s reward circuitry.

Managed by Maine Medical Center Research Institute and the University of Vermont, The Northern New England Clinical and Translational Research (NNE-CTR) Network is a group of academic institutions with portfolios that include research on health issues in rural populations. The network collaborates with the University of Southern Maine, and its partners include Dartmouth Synergy and Tufts University School of Medicine.

One way that the NNE-CTR plans to support research into improving the health of opioid-addicted people in rural populations is through various pilot projects, the most successful of which may receive additional funding. “We were a little concerned about whether we would be able to get a significant number of applications for these projects,” says NNE-CTR’s other co-director Gary Stein. “We were hoping, initially, to be able to get 10 or 15 good proposals. We received 35, eight of which focus on the opioid crisis in New England. We were absolutely amazed, and to us this is real validation of an interest in engagement.”

To learn more about the opioid crisis in America, visit the PBS NewsHour

website to watch segments and read stories on various aspects of the epidemic. The videos and stories were funded in part by NIGMS’ Science Education Partnership Awards (SEPA) program.

Understanding the science of pain, with the help of virtual reality (10/4/17)

The mechanics and science of addiction and the multidisciplinary approach—including hypnosis and virtual reality—being taken by those at the University of Washington, the first institution to treat pain as a problem, not just a symptom of something else.

The catastrophe of fentanyl, a synthetic opioid that’s roughly 50 to 100 times more potent than morphine and that everyone from clinics to the DEA’s special testing lab in Northern Virginia are trying to get a handle on. Fentanyl was responsible for 80 percent of the overdoses in Massachusetts in 2016.

The heart valve problems of addicts who often face repeat surgeries if they can’t stop taking opioids, as seen from the perspectives of surgeons and a bioethicist.

The problems faced by addicted newborns who end up in NICU facilities, dosed with methadone and clonidine to get them past their withdrawal. The focus of this segment is the neonatal therapeutic unit at Cabell County-Huntington Hospital in southern West Virginia.

A reminder of how NOT to dispose of opioids and alternative safe-disposal methods.

The division among professionals who want to treat addicts with suboxone and other medication assistance and those who insist on a drug-free recovery, as played out in Naples, Florida.

A detailed look on how a brain gets hooked on opioids and how chronic pain patients who deal with mood disorders are at high risk.