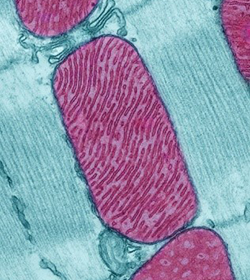 Mitochondria (mitochondrion in singular) are indispensable. Every cell of our bodies, apart from mature red blood cells, contains the capsule-shaped organelles that generate more than 90 percent of our energy, which is why they’re often called “the powerhouse of the cell.” They produce this energy by forming adenosine triphosphate (ATP), our cells’ most common energy source. But mitochondria also support cells in other ways. For example, they help cells maintain the correct concentration of calcium ions, which are involved in blood clotting and muscle contraction. Mitochondria are also the only structure in our cells with their own unique DNA, which with rare exceptions, is inherited only from mothers. That’s why, in honor of Mother’s Day, we’re exploring this special cellular connection to moms.

Most scientists believe that mitochondria have their own DNA because they originated as free-living bacteria that were engulfed by primitive eukaryotic cells but not digested about 1.5 billion years ago. Instead, the two cells benefited each other and eventually developed a relationship that would evolve into more complex life, such as plants and animals. 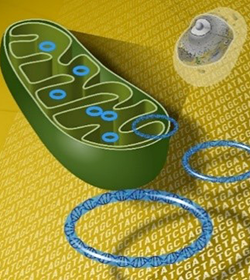 Mitochondria’s involvement in cellular processes requires direction from both the DNA found in our cells’ nuclei and mitochondrial DNA. Mitochondrial DNA forms a circle and contains 37 genes. This makes it tiny compared to our nuclear DNA, which contains about 20,000 genes.

Mitochondria as a Maternal Inheritance

Mitochondrial DNA can be helpful for other investigations, too, such as identifying human remains when researchers don’t have DNA from the person they’re searching for but do have access to family members’ DNA. For example, Russia’s last ruling family, the Romanovs, were executed and buried in unmarked graves during the Russian Revolution, and mitochondrial DNA played a key role in identifying their remains more than 75 years later.

Currently, NIGMS funds many scientists who study mitochondria and their DNA. Research ranges from how these organelles synthesize proteins to how they’re altered in diseases associated with aging. These studies will increase our understanding of mitochondria and could ultimately help find treatments for some diseases.

5 Replies to “The Maternal Magic of Mitochondria”