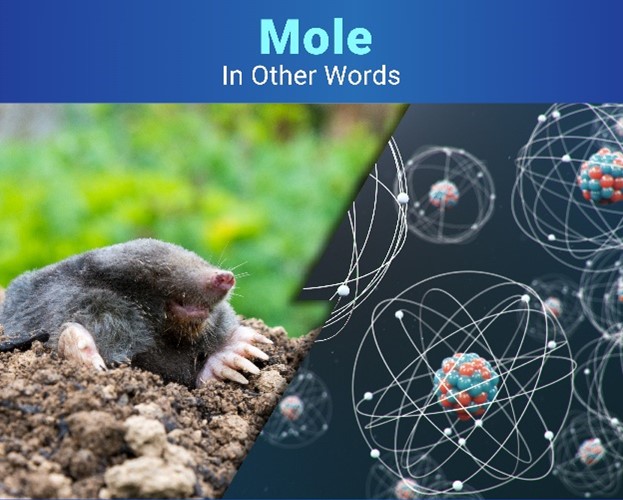 When we encounter the word mole, some of us might think of a small, fuzzy animal that burrows in gardens, or perhaps the common, pigmented marks on our skin. But in chemistry, the mole is a key unit of measurement; its name is derived from the word molecule. Similar to how “dozen” is another way of saying 12, “mole” is another way of saying 602,214,076,000,000,000,000,000 (that’s about 602 billion trillion), specifically for elementary entities such as molecules and atoms. Scientists sometimes abbreviate this number as 6.02 x 1023, which is why Mole Day is celebrated from 6:02 a.m. to 6:02 p.m. on October 23 each year.

Chemists use moles when calculating reagents for a chemical reaction or determining concentration of a solution. Similar to how a recipe requires specific amounts of each ingredient, reaction protocols call for specific ratios of each reagent, and using moles allows chemists to directly determine that ratio.

Because moles quantify the number of particles—not the overall mass—and different types of particles have different masses, a mole of one substance can vary greatly in mass from a mole of another. For instance, one mole of helium is 4 grams, while one mole of gold is 197 grams! (Check out this infographic for more examples.)

The number of particles in a mole is called Avogadro’s number, after Italian scientist Amedeo Avogadro, who lived from 1776 to 1856. He didn’t introduce the mole, but he made other important contributions to chemistry for which later scientists wanted to honor him.

When the mole joined the International System of Units in 1971, it was defined as the amount of substance that contained as many elementary entities as there were atoms in 0.012 kilograms of the most common form of carbon, called carbon-12. However, that definition eventually drew criticism for being overly complex. In 2018, a new definition was approved that defined the mole as “exactly 6.02214076 × 1023 elementary entities” of a substance.

The number of garden-dwelling moles on Earth is drastically less than a chemistry mole, but they’re still common critters. If you see one, take a moment to consider its homonym’s important role in chemistry.

If you think of another word that means one thing in everyday conversation and something else in science, let us know in the comments below. We might feature it in a future blog post!

One Reply to “In Other Words: The Measure of a Mole”