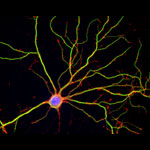 Anesthetic drugs are vital to modern medicine, allowing patients to undergo even the longest and most invasive surgeries without consciousness or pain. Unfortunately, studies have raised the concern that exposing patients, particularly children and the elderly, to some anesthetics may increase risk of long-term cognitive and behavioral issues.

of the University of California, San Diego, examined the effects of anesthesia on neurons isolated from juvenile rats. Given at doses and durations frequently used during surgery, the commonly administered general anesthetic isoflurane did in fact reduce the number and size of important structures within neurons called dendritic spines. Dendritic spines help pass information from neuron to neuron, and disruption of these structures can be associated with dysfunction in thinking and behavior.

Promisingly, the shrinkage observed by the researchers appeared to be temporary: After the researchers washed the anesthetic out of the cell cultures, the dendritic spines grew back. But because neurons in culture do not reproduce all aspects of intact neuronal networks, the scientists explain that the findings should be verified in more complex models. Other molecular mechanisms may also potentially contribute to late effects of anesthesia exposure.

This work also was funded by NIH’s National Institute of Mental Health.

Understanding Anesthesia from Inside Life Science

One Reply to “Anesthesia and Brain Cells: A Temporary Disruption?”