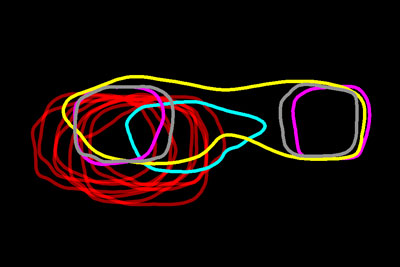 Looking like necklaces stacked on a dresser, these bright, amorphous loops show the outlines of yeast proteins that make up the spindle pole, a cellular component found in organisms as diverse as yeast and humans. Each cell starts with a single spindle pole, which must somehow duplicate to form the pair that works together to pull matching chromosomes apart during cell division. Scientists don’t completely understand how this duplication occurs, but they do know that errors in spindle pole copying can lead to a number of health conditions, including cancer.

Until recently, the spindle pole proteins were too small to see clearly in living cells, even with the most sophisticated microscopes. Mark Winey of the University of Colorado Boulder along with others at CU-Boulder and the Stowers Institute for Medical Research have used a novel imaging technique to get an unprecedented look at these proteins in the process of duplicating.

The scientists used an existing technology called SIM to take dozens of images of each of the 18 proteins that make up the spindle pole in yeast cells. The resulting images included a lot of blurred areas, suggesting structures that weren’t really present. To get clearer pictures, the team then averaged each set of images of the same protein at the same stage of cell division. This technique, abbreviated SPA, wiped away the blurred areas. In each of the refined images, the scientists traced the perimeter of the protein and stacked all of the protein outlines to compare the position and duplication stage of each protein relative to the others. For example, in the image above, the large, oval-shaped outline in yellow shows a protein in the process of duplicating while the two small, square-shaped magenta ones show proteins that have already been copied.

In addition to learning about the timing of duplication for each individual spindle pole protein, the scientists were surprised to learn that the entire spindle pole duplication process appears to begin toward the end of cell division instead of near the very beginning, as had long been thought.

In the news release about the study

, Jay Unruh, one of team’s scientists from the Stowers Institute, says, “The big-picture take away is that even structures that are considered by many to be ‘solved’… have remarkable surprises when one is finally able to study their formation in cells.”

The scientists are hopeful that their SIM-SPA imaging technique will provide glimpses into the formation of many more complex protein structures in living cells.

Check out the video in this NIH Director’s Blog post to see another example of an innovative extension of SIM imaging that provides stunning views inside the cell.