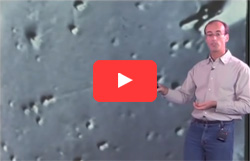 While geared mostly for undergraduate students, graduate students and postdoctoral researchers, the videos are also a rich resource for anyone who wants a better understanding of many biomedical areas, including those we cover on this blog.

Vale is as committed to his science outreach work as he is to his motor protein research. He shared details about iBiology during a recent phone conversation.

Why did you start iBiology?

I started the project so that many more people could have the opportunity to hear scientists talk about their work. Science communication in oral form is important because people learn differently when they hear and see people talk than when they read papers or textbooks. But not every person has the opportunity to attend research seminars. Through iBiology, millions of people worldwide have been able to watch leading scientists give talks that they couldn’t have experienced otherwise.

How is iBiology different from other science education platforms?

“The same mental challenge I love about science applies to science education outreach.”

There are lots of great sites where you can learn facts about biology. What people often don’t get from them is how that knowledge was gained. In many of the iBiology videos, though, the scientists tell fascinating stories about how they approach research and solve problems, and they share insights into the discovery process.

Do you have a favorite iBiology video?

. I’m often in the room when these “discovery” talks are being taped. It’s a real privilege to hear the scientists, many of whom have received major scientific honors, describe the events that led to their findings.

Has iBiology helped you as a scientist?

It’s broadened my scientific horizons. Through iBiology, I’ve met a lot of scientists outside my field—ecologists, chemical biologists, neuroscientists. As a researcher, coming up with good questions can be a challenge. iBiology has helped me to see how other scientists ask questions, approach research problems and interpret data.

Does your outreach work have any similarities to your scientific research?

The same mental challenge I love about science applies to science education outreach. In science, you see a problem that hasn’t been solved, and it’s an important problem. The same thing is true in outreach. Trying to address these problems takes passion, persistence, creativity and innovation.

Why are you passionate about outreach?

Because I’m in a position to give back, I feel it’s my ethical responsibility. I think that outreach is something that more scientists should be doing.