In part I of this series, we mentioned that the extracellular matrix (ECM) makes our tissues stiff or squishy, solid or see-through. Here, we reveal how the ECM helps body cells move around, a process vital for wounds to heal and a fetus to grow. 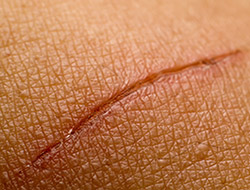 When we get injured, the first thing our body does is to form a blood clot to stop the bleeding. Skin cells then start migrating into the wound to close the cut. The ECM is essential for this step, creating a physical support structure—like a road or train track—over which skin cells travel to seal the injured spot.

The ECM is made up of a host of proteins produced before and after injury. Some other proteins called matrix metalloproteinases (MMPs) also crowd into wounds. Because humans have so many different MMPs—a full 24 of them!—it’s been difficult for scientists to figure out what roles, if any, the proteins play in healing scrapes and cuts.

To find out whether MMPs help close wounds, Andrea Page-McCaw and colleagues at the Vanderbilt University Medical Center turned to the fruit fly. This model organism has just two MMPs, only one of which (MMP1) can move about to do things like helping repair damaged tissues. The scientists used immature flies (larvae) whose soft outer layer is easier to work with and, surprisingly, more similar to the epithelia of our own skin than is the hard shell of adult fruit flies.

The researchers examined wounds in the larvae of two special fruit fly strains: one that can’t make MMP1 and one that produces more than the normal amount of MMP1. In the strain that lacked MMP1, wounds failed to close. In the strain that had extra MMP1, wounds closed much more quickly than in normal flies. The researchers had their answer: Yes, MMP1 does help heal injuries because it’s necessary for wounds to close.

As is often the case in scientific research, the answer led to some other questions, including “What, exactly, is MMP1 doing?” and “How does it work?”

Page-McCaw’s team is aiming for the answers. So far, her team has learned that within hours of an injury, large amounts of MMP1 amass at the edges of the damaged tissue. A tough, stringy protein called collagen (see earlier post) also accumulates at these edges, where it assembles to form a major part of the basement membrane.

Because MMP1 is also present where and when the basement membrane is forming, Page-McCaw’s team suspects that MMP1 is involved, along with collagen, in this critical part of the wound healing process.

Cells on the Move in Embryo Development 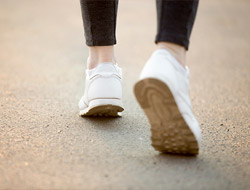 Sensing and responding to mechanical friction is important for all sorts of movements, like walking and even cell migration. Credit: Stock image.

When we go for a run or stroll, we’re usually unaware of how much coordination and detection of force of friction between foot and ground are required to quickly and safely move us forward.

It turns out that such fine-tuned movement also takes place during a baby’s first few days in the womb. Even when the embryo is still less than an inch long, a whole lot of to-and-fro cell movement is going on, with many cells migrating en masse to form tissues and organs. If cells journey to the wrong place or fail to travel at all, birth defects can result. So, scientists wondered, what role does the ECM play in these early mass cell migrations?

This question was on the minds of Douglas DeSimone and colleagues at the University of Virginia School of Medicine. Using embryos of the clawed frog Xenopus as stand-ins for human ones, the researchers studied cadherins, protein molecules that are like molecular pegs in the cells’ membranes, providing tiny joints that attach the cells to each other. When the researchers used sophisticated biophysical techniques to tug at the cadherins, they saw that this pull causes the cells to change their shape and to begin migrating away from the direction of the pull.

Because similar forces yank and pull on cadherins when neighboring cells physically interact with each another in a tissue, the researchers think that cadherins help relay these mechanical forces to coordinate the cells’ movements. This coordination is essential so that the cells move not in slapdash fashion but in a well-orchestrated march.

It turns out that the ECM helps cells coordinate these movements. Protein molecules called integrins fasten cells to the ECM. When they do so, they activate cellular machinery that primes cells to move in response to tension—again sensed via cadherins—and helps roving groups of cells orient in one direction. Once again, the ECM performs an essential service, helping cells assemble into a whole new person.

2 Replies to “The ECM: A Dynamic System for Moving Our Cells”