This is the first post in a new series highlighting NIGMS’ efforts toward developing a robust, diverse and well-trained scientific workforce. 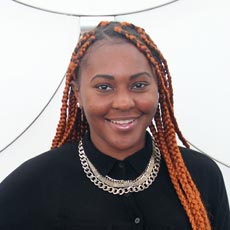 “A lot of people would never guess that I’m in research and I take pride in that. I want to be able to represent people that don’t even go this far,” Chyann Richard, 20, says.

BUILD and the Diversity Program Consortium

The Diversity Program Consortium (DPC) aims to enhance diversity in the biomedical research workforce through improved recruitment, training and mentoring nationwide. It comprises three integrated programs—Building Infrastructure Leading to Diversity (BUILD), which implements activities at student, faculty and institutional levels; the National Research Mentoring Network (NRMN), which provides mentoring and career development opportunities for scientists at all levels; and the Coordination and Evaluation Center (CEC), which is responsible for evaluating and coordinating DPC activities.

Ten undergraduate institutions across the United States have received BUILD grants, and together, they serve a diverse population. Each BUILD site has developed a unique program intended to engage and prepare students for success in the biomedical sciences and maximize opportunities for research training and faculty development. BUILD programs include everything from curricular redesign, lab renovations, faculty training and research grants, to student career development, mentoring and research-intensive summer programs.

Currently a junior at California State University, Long Beach (CSULB), Richard is majoring in psychology. After she graduates with a bachelor’s degree in 2018, she plans to continue to a Ph.D. program and do research in behavioral neuroscience.

Richard is among a select group of undergraduate college students participating in the Building Infrastructure Leading to Diversity (BUILD) program. The BUILD programs focus on finding innovative approaches to increase student engagement in the biomedical sciences, through interventions at student, faculty and institutional levels. As a BUILD scholar, Richard is conducting laboratory research and preparing for graduate school through career development seminars, presentations and other activities.

Richard loves how research introduces her to new ideas and allows her to share these concepts with others, including her parents.

“Because they’ve been teaching me my whole life … now I’ve got a one-up because I know about research and they don’t. That’s really fun,” she says.

Richard’s interest in behavioral neuroscience is both personal and scientific. During Richard’s junior year of high school, her mother was diagnosed with generalized anxiety disorder. This sparked Richard to take an Advanced Placement (AP) psychology course, where she began learning about the prevalence of and treatments for such disorders.

“[The class] started bringing [my mom’s condition] into perspective – that it wasn’t just some random thing,” Richard says.

The coursework came naturally to her, and Richard dedicated herself to the class, even spending spring break of her senior year preparing for the AP exam (she passed!).

Richard’s college pathway hasn’t been easy, but she describes herself as highly motivated and her optimistic outlook helps her stay on task and focused. 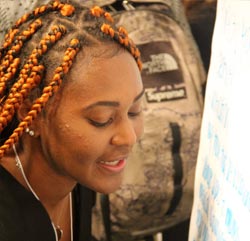 Chyann Richard records notes for her group during a BUILD networking event at the annual Society for Advancement of Chicanos/Hispanics and Native Americans in Science meeting in Long Beach, CA. After the small group discussions, students present their insights to the whole group and learn about activities throughout the BUILD community. Credit: Christa Reynolds.

Before she got to CSULB, she was enrolled at Cerritos College, a community college near her hometown of Inglewood, California. At Cerritos, Richard played basketball, took extra courses and held a job. She’s confident that this experience with time management, and her current work with BUILD activities, are preparing her for a successful graduate career.

“When people keep telling me, ‘Graduate school is a lot of time,’ – I been through that … It doesn’t deter me from wanting to do it,” she says.

A research methods professor at Cerritos College informed Richard about the BUILD program at CSULB and explained how it helps undergraduate students conduct research and prepare for graduate school. The idea of doing research as a career was completely new for Richard. Before, she thought that being in psychology meant having a job at a hospital. Now, as a BUILD scholar, Richard explains to her family and friends that being a researcher is a viable career, where she might look for ways to improve treatments for a variety of ailments.

Through BUILD, Richard works in CSULB Assistant Professor Michelle Barrack’s lab, which has a multidisciplinary focus on health and nutrition. The lab is looking to validate a nutrition screening survey as part of its studies on the female athlete triad, a collection of three interrelated conditions that may affect female athletes: low energy availability, irregular menstruation and osteoporosis or low bone mass. Richard points out that other surveys have been developed, but they don’t address specific symptoms and early signs of the triad. The survey will also have applications for male athletes as an assessment for nutritional deficits. 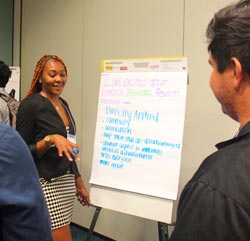 Chyann Richard participates in a networking event for BUILD students at SACNAS. Working in small groups, the students discuss their programs and what they enjoy about biomedical research. Credit: Christa Reynolds.

As the sole psychology major in the lab, Richard contributes a unique viewpoint, such as considering the effect a person’s psychological state has on participation in nutrition surveys and hesitancy in answering certain questions.

Richard is also enthusiastic about the mentoring she’s receiving from Barrack.

Richard’s advice for students interested in research is “Do not get discouraged” even if they want to pursue a different career path than their parents or friends. She describes her family as “regular middle class, working people,” who have supported her because they want her to do well in life. This motivates her to succeed, as does overcoming some stereotypes about what a scientist should look like.

“If you really want to do it, make sure you get it done,” Richard says.

2 Replies to “Getting It Done: Chyann’s Path to Graduate School and Research” 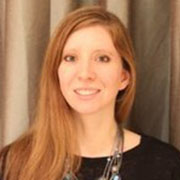