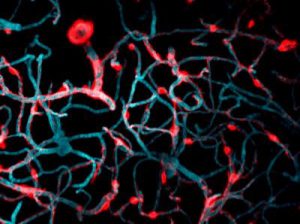 Nerve cells, or neurons, in our brains do amazing work, from telling our hearts to beat to storing our memories. But neurons cannot operate alone. Many kinds of cells support and regulate neurons and—like neurons—they can come under attack due to injuries or disorders, such as stroke or Alzheimer’s disease. Learning what jobs these cells do and how they respond to disease may show researchers new ways to treat central nervous system disorders. One type of support cell, the pericyte, plays some key roles in brain health. These cells are readily adaptable, even in adult brains, and can support a variety of functions.

Pericytes help with blood flow to nerve cells in the brain. They lie wrapped all along the huge networks of capillaries—the tiniest blood vessels—that both feed neurons and form the blood-brain barrier, which filters out certain substances from blood to protect the brain. Pericytes have a body that appears as a bump protruding from a capillary surface. Pericytes also have long thin arms that stretch along each capillary like a snake on a tree branch. These arms, called processes, reach almost to where the next pericyte process begins, without overlapping. This creates a pericyte chain that covers nearly the entire capillary network.

Pericytes are critical for blood vessel stability and blood-brain barrier function. They’re also known to die off as a result of trauma and disease. Andy Shih

, Andree-Ann Berthiaume, and colleagues at the Medical University of South Carolina in Charleston, set up an imaging technique in mouse brains that allowed them to see what pericytes do under normal conditions as well as how these cells respond when some are damaged.

Over a period of weeks, Shih watched normal mouse capillaries and their pericyte attendants. The mice had been engineered so that their pericytes glowed fluorescent. Images showed that pericytes’ processes reached out and shrank back periodically by small amounts. As one process grew along a capillary the next pericyte process in the chain retracted. This ensured that the two cells never overlapped.

Using heat, Shih and his team then destroyed several pericytes to see whether their neighbors could compensate for the loss. They did, growing their processes quickly, typically within the first 10 days after the injury to fill the gap. The capillaries that were uncovered when the pericytes were eliminated still functioned, but they became larger. Capillaries need to be slightly constricted to perform well. These same capillaries returned to normal once the neighboring pericytes grew over them. Pericytes’ ability to compensate for losses like this could be an important way that the brain maintains its health. Figuring out a way to exploit this ability may help in developing future treatments for neurological disorders.