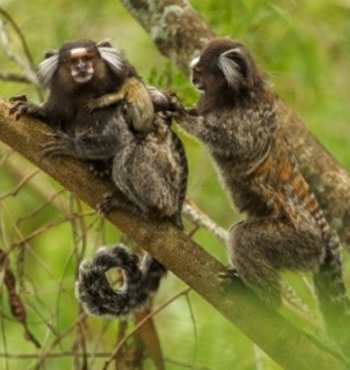 Fatherhood takes many forms across the animal kingdom. For instance, mammalian fathers are often uninvolved, with only about 10 percent helping to raise their offspring. However, that small percentage of males often makes valuable contributions to their offspring’s upbringing. For instance, cotton-top tamarin and common marmoset dads have the responsibility of carrying babies—which are typically born as sets of twins—almost constantly from birth until independence.

In other groups of animals, fathers are much more likely to share responsibilities with mothers or even act as sole caregivers. Male and female birds contribute equally to raising chicks in most cases. But in rheas and emus—both large, flightless birds—fathers incubate eggs and take care of hatchlings on their own.

And most fish don’t care for their young, but out of the species that do, between one-third and one-half rely on fathers parenting alone. Perhaps the most well-known example is the seahorse, where the male becomes pregnant, carrying his mate’s fertilized eggs in a pouch on his belly until they hatch. Alison M. Bell, Ph.D.

, professor of evolution, ecology, and behavior at the University of Illinois at Urbana-Champaign, is investigating paternal care in another fish species where fathers raise offspring solo: the three-spined stickleback. Her work not only helps us understand the value of paternal care for sticklebacks, but also contributes to growing evidence across many species that fatherhood changes males on a physiological level. 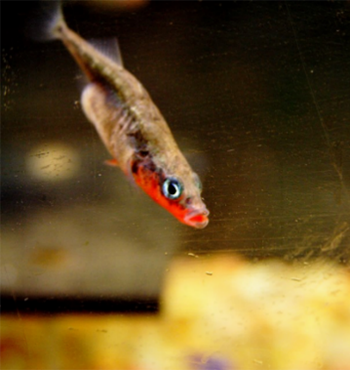 Sticklebacks are small fish, typically little more than an inch long, that live in coastal or freshwater environments. Male sticklebacks build nests before courting females, and if their courtship succeeds, the female lays eggs in the nest. After fertilizing the eggs, the male keeps watch over them for 6 or 7 days until they hatch. He scares away predators, removes any eggs that begin to grow dangerous fungi, and spends up to half of his time fanning the eggs with his fins to circulate oxygen-rich water. After the eggs hatch, he continues to care for the young fish for about another week, keeping them close to the nest until they’re ready to venture out on their own.

“It’s really remarkable how many of the different stages of care are comparable to the kinds of changes that mammalian parents experience,” says Dr. Bell. This paternal care not only keeps offspring safe, it also affects how they act after they hatch. Sticklebacks raised without fathers show significantly higher levels of behaviors associated with anxiety, and they don’t respond correctly to threats from predators. Differences in individual parenting styles, such as the amount of time dads spend patrolling for predators or fanning, may also have an effect. In addition, early results suggest parenting styles may be heritable, passed down from fathers to sons.

Dr. Bell’s research also supports a conclusion that many other scientists are reaching by studying other animals: Fatherhood changes the brains of male animals. It does so by triggering a greater production of hormones like oxytocin, estrogen, prolactin, and vasopressin. Scientists have long known that these hormones surge during motherhood across many species. But now they’re finding that the hormones also increase in male animals when they care for eggs, when their mates are pregnant, or after their mates give birth. The heightened levels of hormones are believed to encourage bonding and nurturing behaviors in fathers. As strange as it may sound, Dr. Bell says, “Hormones involved in lactation in mammals are regulating paternal care in a fish.”

Studying stickleback fish and other animals that show paternal care helps us understand both how hormones are involved in fatherhood and how and why fathering affects offspring.