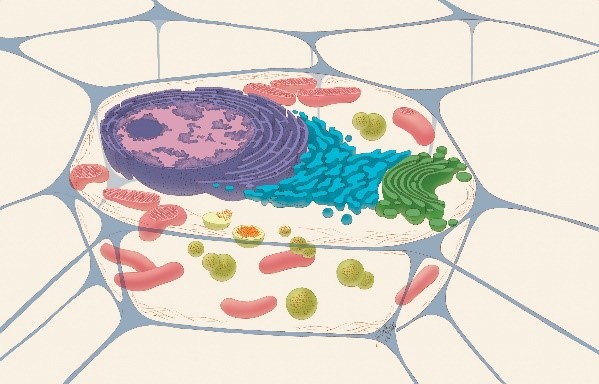 A cross-section of a cell showing organelles. Credit: Judith Stoffer.

Welcome to our tour of the cell! Imagine you’ve shrunk down to about 3 millionths of your normal size. You are now about 0.5 micrometers tall (a micrometer is 1/1,000th of a millimeter). At this scale, a medium-sized human cell looks as long, high, and wide as a football field. But you can’t see nearly that far. Clogging your view is a rich stew of molecules, fibers, and various cell structures called organelles. Like the internal organs in your body, organelles in the cell each have a unique biological role to play.

The Nucleus and Its Closest Neighbor

Our first stop is the somewhat spherical structure about 50 feet in diameter. It’s the nucleus—basically the cell’s brain. The nucleus is the most prominent organelle and can occupy up to 10 percent of the space inside a cell. It contains the equivalent of the cell’s genetic material, or DNA. Over the side of the nucleus are groups of enormous, interconnected sacs close by, a network called the endoplasmic reticulum (ER). Each sac is only a few inches across but can extend to lengths of 100 feet or more. The ER often makes up more than 10 percent of a cell’s total volume. A closer look reveals that the sacs are covered with bumps, called ribosomes, about 2 inches wide. Ribosomes have a critical job of assembling all the cell’s proteins. 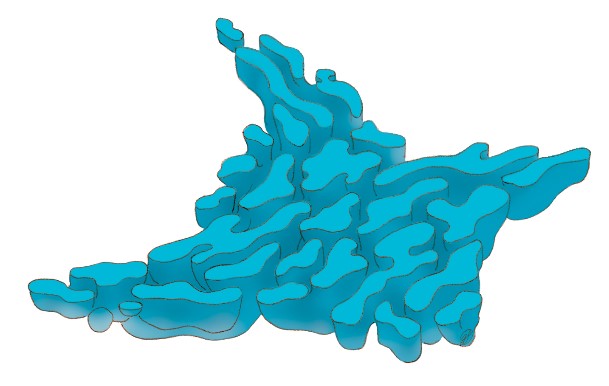 As we venture out onto the ER and farther from the nucleus, the ribosomes start to thin out. This part of the ER, known as the smooth ER, has a different shape and function than the ribosome-studded rough ER. A maze of branched tubules, the smooth ER specializes in making lipids and also contains enzymes that break down harmful substances.

Distributing and Breaking Down Molecules The stack of a half dozen flattened balloons, each a few inches across and about 2 feet long, is the Golgi complex. Also called the Golgi apparatus or, simply, the Golgi, it receives newly made proteins and lipids from the ER, helps them mature and become functional, then packs them up and sends them to their final destinations. One of the places these molecules can end up is in lysosomes. 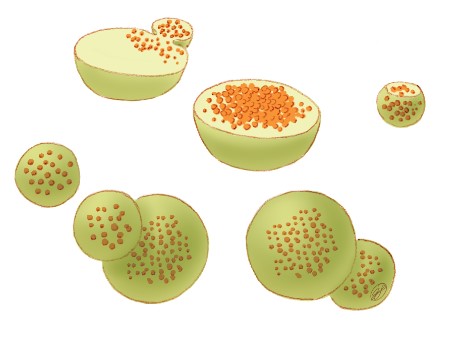 Perhaps even more than other organelles, lysosomes can vary widely in size—from 5 inches to 30 feet across. Lysosomes use powerful enzymes and acids to precisely chip molecules into their component parts, almost all of which the cell recycles as nutrients or building blocks. Lysosomes also act as cellular garbage trucks, hauling away unusable waste and dumping it outside the cell. From there, the body has various ways of getting rid of it. 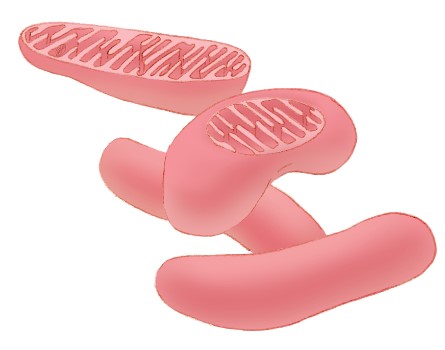 Before we move on to the last stop on our tour, take a moment and blink. Breathe. Wiggle your toes. These subtle movements—as well as the many chemical reactions that take place inside organelles— require vast amounts of cellular energy. The main energy source in your body is a small molecule called adenosine triphosphate (ATP), and it’s made in organelles called mitochondria. They look like blimps about as long as pickup trucks but somewhat narrower. As we get nearer to them, you may hear a low whirring or humming sound, similar to that made by a power station. It’s no coincidence. Just as power plants convert energy from fossil fuels or hydroelectric dams into electricity, mitochondria convert energy from your food into ATP.

You’ve explored quite a bit of the cell in a short time. However, this tour covered only organelles. There are many other fascinating structures and processes within cells, and you can learn more about them in our Studying Cells fact sheet.