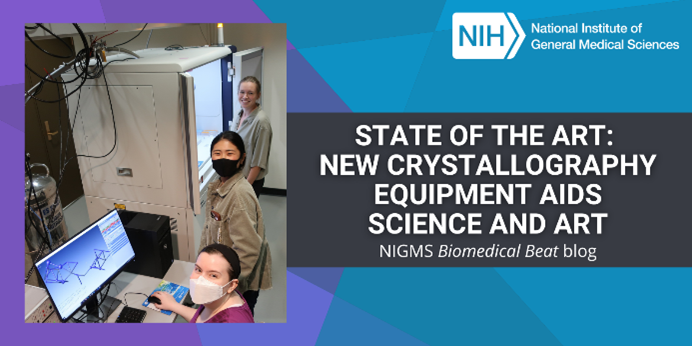 Upgrading X-ray crystallography equipment at the University of Arkansas in Fayetteville has had an unexpected benefit: enabling analyses that could help art museums authenticate, restore, and learn more about their pieces.

Scientists use X-ray crystallography to determine the detailed 3D structures of molecules. In biomedical contexts, researchers often apply X-ray crystallography to map the structures of proteins and other biomolecules like DNA and RNA. A molecule’s structure can shed light on its function and help answer scientific questions. For example, knowing the structures of proteins involved in antibiotic resistance can help researchers determine how those molecules work and how to combat bacteria that produce them.

Many colleges and universities—especially those without graduate programs—don’t have X-ray crystallography equipment due to the high cost. The X-ray crystallography center at the University of Arkansas, which is supported in part by the Arkansas IDeA Networks of Biomedical Research Excellence (INBRE), provides X-ray crystallography services to scientists—like professors and undergraduate students from small colleges—who might otherwise struggle to access them. The center has trained many students and solved the structures of more than 80 molecules, which have been added to the Protein Data Bank and collectively downloaded more than 1.6 million times.

In 2020, the X-ray crystallography center sought funding to replace 17-year-old equipment because it needed parts that the manufacturer no longer produced. The new equipment not only creates higher-resolution images but also lets researchers examine smaller molecules as well as analyze powdered samples—which wasn’t a possibility before. Josh Sakon, Ph.D., a professor of biochemistry at the University of Arkansas and director of the X-ray crystallography center, realized this new ability meant they could analyze samples from artwork. As an art lover himself, he found the possibility exciting and reached out to three local museums.

The X-ray crystallography center is still testing its new equipment and formalizing agreements with the museums, but several projects have already been suggested. Two museums have pieces of American Indian pottery with an unknown dark material on the bottom, and one of them also has arrowheads crafted by American Indians with unidentified purple-blue crystals on one side. X-ray crystallography could reveal the identities and origins of these artifacts’ components. “We might be able to help tell a story about those pieces,” says Dr. Sakon.

Another museum wants to use X-ray crystallography to help authenticate works by examining paint molecules. It also plans to analyze paints from pieces to determine their original colors, which will support restoration efforts.

Dr. Sakon looks forward to involving students in these new X-ray crystallography projects. He aims to pique their interest and encourage them to consider scientific careers—one of the primary goals of the INBRE program. “I hope that analyzing art pieces will make chemistry more approachable for some students who are normally scared of it,” he says. He’s excited to build upon the X-ray crystallography center’s success with biomedical molecules and explore the intricate connection between chemistry and art.