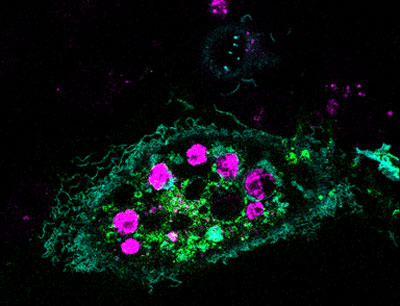 In this image, a healthy cell (green) has engulfed a number of dying cells (purple) just as a predator might ingest wounded or dying prey. A team of researchers is hoping to use this same strategy at the cellular level to help treat infection, neurodegenerative diseases or cancer.

Our bodies routinely use a process called phagocytosis to rid themselves of unhealthy cells. Takanari Inoue at Johns Hopkins University and collaborators at the University of Tokyo set out to investigate the molecular underpinnings of phagocytosis. Their goal was to endow laboratory-grown human cells with phagocytotic skills, namely the ability to recognize, swallow and digest dying cells. The scientists tried to do this by inserting into the cells two molecules known to play a role in phagocytosis.

The engineered cells accomplished the first two tasks—they recognized and surrounded dying cells. But they didn’t digest what they’d engulfed. Now the researchers are looking for a molecular trigger to get the engineered cells to complete this last task.

Eventually, the scientific team aims to build artificial cells that are programmed to target and destroy abnormal cells, such as those ravaged by bacteria, cancer or other diseases.