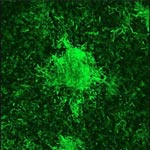 Communication through quorum sensing is key to the formation of biofilms, slimy bacterial communities that can cause infections and are often stubbornly resistant to antibiotics. Credit: P. Singh and E. Peter Greenberg.

Like a person trailing the aroma of perfume or cologne, bacteria emit chemical signals that let other bacteria of the same species know they’re there. Bacteria use this chemical communication system, called quorum sensing, to assess their own population size. When they sense a large enough group, or quorum, the microbes modify their behavior accordingly. Many disease-causing bacteria use quorum sensing to launch a coordinated attack when they’ve amassed in sufficient numbers to overwhelm the host’s immune response.

Chemist Helen Blackwell of the University of Wisconsin-Madison has been making artificial compounds that mimic natural quorum-sensing signals, as well as some that block a natural signal from binding to its protein target—a step needed to produce a change in bacterial behavior. By altering key building blocks in these protein targets one by one, Blackwell’s team found that small changes could convert an activation signal into an inhibitory signal, or vice versa, indicating that small-molecule control of quorum sensing is very finely tuned.

Improved understanding of the molecular basis of quorum sensing could help scientists design more potent compounds to disrupt these signals. Using such compounds to quiet quorum sensing may provide a new way to control disease-causing bacteria that reduces the chances an infection will become resistant to treatment.