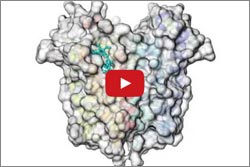 Two structural studies have now shed light on the mysterious mitochondrial membrane protein TSPO. This protein plays a key role in transporting cholesterol and drugs into the cell’s mitochondria. While here, the cholesterol is converted to steroid hormones that are essential for numerous bodily functions. Although many researchers have been studying TSPO since the 1990s, they’ve remained uncertain about its mechanisms and how it truly functions.

In a study done at Michigan State University, Shelagh Ferguson-Miller and colleagues used X-ray crystallography to determine the structure of TSPO in bacteria models. By doing so, they could visualize where cholesterol potentially binds with the protein, how the two may interact and how that interaction could affect the creation of steroid hormones.

The team also identified a TSPO variant that is associated with altered steroid hormone production and anxiety-related diseases. Cholesterol seemed to bind less strongly to this protein, potentially affecting TSPO-cholesterol interactions in mitochondria that are critical for steroid hormone synthesis.

In another study, Wayne Hendrickson

and his colleagues at Columbia University, the New York Structural Biology Center and Brookhaven National Laboratory used high-intensity X-rays to produce snapshots of TSPO alone and with a compound similar to the anti-anxiety drug Valium. The images highlighted interactions between TSPO and the Valium-like compound.

The team also conducted a series of biochemical experiments that showed TSPO breaks down a compound found in red blood cells to produce a product similar to a chemical that hunts for reactive oxygen species (ROS). ROS have been linked to disease processes that contribute to cardiovascular disease and cancer. The findings suggest that TSPO may help regulate levels of ROS in cells.

Because TSPO has been connected to a variety of human diseases, bringing its structure into view could aid progress in developing new drugs for TSPO-related conditions.