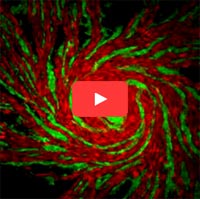 But the system isn’t perfect. Invading pathogens can go undetected, and the body can mistake its own cells for intruders.

An early step in developing more targeted approaches to address these issues is to gain a better understanding of the molecular mechanisms involved in allorecognition. “At a basic level, we are still trying to understand how one cell recognizes another,” says Gad Shaulsky of Baylor College of Medicine.

Shaulsky is one of many researchers working to figure this out. Because allorecognition in human cells involves a dizzying number of protein interactions, Shaulsky and his team study a simpler creature, the soil amoeba Dictyostelium discoideum.

“When amoeba cells have abundant food, they behave as unicellular organisms that don’t cooperate with one another,” Shaulsky explains. “When you starve them, they aggregate with their close relatives into a fascinating structure of about 100,000 cells that has coordinated movement and can sense light and heat even though it doesn’t have a nervous system.”

Using a series of experiments that entailed inserting, deleting and swapping amoeba genes, Shaulsky determined that amoebas use two sets of proteins to recognize cells from the same strain. Each amoeba cell has a protein called TgrB1 and one called TgrC1 protruding from its outside membrane. Different strains of amoebas have different versions of these proteins. When two amoeba cells from the same strain meet, the TgrB1 proteins from each cell lock into the TgrC1 proteins in the other cell, enabling the cells to join together. When cells from different strains meet, their proteins don’t match, so they can’t aggregate.

By conducting additional gene-swapping experiments, Shaulsky now wants to learn exactly what happens inside an amoeba cell on a molecular level after the Tgr proteins connect. He thinks that contact between the proteins might set off a cascade of signals that ultimately tells cells whether to join together with a close relative.

The Tgr system in the amoeba is similar to our own MHC system, but Shaulsky is quick to point out that these allorecognition processes evolved independently. These different origins mean that the molecular mechanisms he uncovers in the amoeba will not necessarily be the same in humans. However, gaining new insights into how allorecognition works in this simple creature may inform allorecognition research in more complex organisms.

One Reply to “How a Cell Knows Friend From Foe”