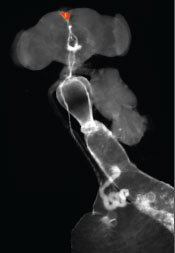 , suspected that the flies had a molecular system for choosing energy-replenishing foods, especially during periods of starvation. 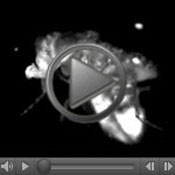 To identify the sensor, Suh, Dus (now at the University of Michigan) and others looked for neurons in the fly brain that responded differently after flies ate natural or artificial sugars. The search led them to six neurons, collectively called Dh44. These neurons produce a hormone that’s similar to a mammalian one involved in regulating stress responses and maintaining energy balances.

The researchers observed that when the flies consumed the caloric sugar—but not when they ate the artificial sweetener—the Dh44 neurons fired and released the hormone. This activation by nutritive sugars promoted digestion and, at the same time, stimulated feeding. This input-output cycle is called a feedback loop.

The researchers are now wondering if the mammalian hormone similar to the Dh44 one is part of a nutrient sensor system. Suh and others involved in the work plan to investigate this question in mice.