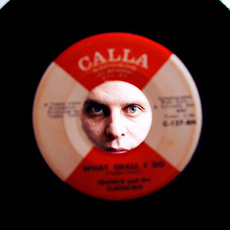 Enrique De La Cruz stood off to the side in a packed room. As he waited for his turn to speak, he stroked the beads of a necklace. Was he nervous? Quietly praying? When he took center stage, the purpose of the strand became clear.

Like a magician—and dressed all in black—De La Cruz held up the necklace with two hands so everyone, even those sitting in the back, could see it. It was made of snap-together beads. De La Cruz waved the strand. It wiggled in different directions. Then, with no sleight of hand, he popped off one of the beads. The necklace broke into two.

For the next hour, De La Cruz pulled out one prop after another: a piece of rope from his pocket, a pencil tucked behind his ear and even a fresh spear of asparagus stuffed in his backpack. At one point, De La Cruz assembled a conga line with people in the front row.

. The show-and-tell performance was part of a scientific lecture on a paradox De La Cruz has studied for more than 10 years—how a chain of molecules strong enough to support a cell can break so easily.

“I benefit from seeing and holding things as much as anyone else,” he says, explaining the props help people—even scientists—understand his research.

By his own account, De La Cruz is an unlikely scientist. A first-generation Cuban-American, he grew up in and around Newark, New Jersey. Few of his friends earned more than a high school diploma. De La Cruz never thought he’d end up running his own lab at an Ivy League research university.

As a young adult, he recalls, “It wasn’t even on my radar as a possibility.”

While discovering new details about biology keeps his job exciting, he says sharing lessons he’s learned with students and other aspiring scientists makes it truly rewarding.

De La Cruz’s first taste of research came during his senior year of high school, when he participated in a work study program at a nearby pharmaceutical company. He tested chemical compounds for their effects on cholesterol in the bloodstream. While the project was unrelated to what he studies now, De La Cruz says the experience made science tangible, partly by putting people and faces to the process.

Because his parents—a welder and hospital pharmacist—instilled in De La Cruz and his siblings the importance of education, he headed to college. But he stayed close to home. He applied only to Rutgers University. Interested in both medicine and teaching, De La Cruz ultimately decided to pursue a career doing research on basic life processes in an academic setting.

But his path to becoming a scientist almost hit a dead end when De La Cruz started graduate school at Johns Hopkins University in Baltimore, Maryland.

His course instructor told him not to stress about the score and to work harder at the things he didn’t know. De La Cruz knew this was true: He had aced an exam in biophysical chemistry, a subject he was interested in and already knew a lot about.

Instead of feeling like he didn’t belong, he felt empowered to seek out the knowledge and guidance he needed to succeed. 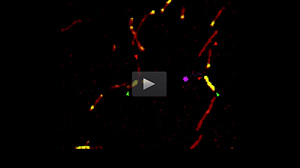 Much of De La Cruz’s career has focused on studying actin, one of the most prevalent proteins on the planet. Actin molecules form long, thin chains that grow and shrink from the ends. These chains, or filaments, allow cells to move and contract, and they help cells keep their shapes. The filaments also play a central role in muscle contraction. Because of these tasks, the filaments must be strong.

Yet, the filaments can break. In many cases, they must break to carry out their functions. To assemble new chains, the filaments recycle their parts. Numerous proteins facilitate this process in cells. Some of the proteins break the filament chains to make more ends, which allows the chains to shrink more rapidly and recycle parts faster.

To investigate how actin filaments break, De La Cruz has relied heavily on techniques, expertise and published papers from other fields.

“An hour in the library can save a week in the lab,” De La Cruz says. “There’s a lot of information already out there, and it’s always useful to look at others’ studies.”

Over the years, he and his team have pieced together many details on how actin filaments form and break.

“Curiosity is what gets you into science and what keeps it fun,” he says. “You’re going to know something in a few months that you don’t know today.”

Individual actin molecules, like the pop-beads of the necklace, string together with the help of salt. The salt helps “glue” the chain links together, De La Cruz explains.

By integrating computer models with biochemical and biophysical experiments, the De La Cruz team learned where the salt connects to actin molecules. Each salt-actin joint is tight, making the chain stiff, like the pencil prop De La Cruz showed the crowd. But a protein called cofilin can push off the salt, weakening the joint so it becomes wiggly—De La Cruz demonstrated this with the rope—and more likely to come apart.

Because a filament has thousands of actin molecules and joints, some sections can be weak and wiggly, while others are stiff. Filament breaks occur where different sections meet, similar to the way an asparagus spear snaps where the hard, woody part meets the soft, fleshy part.

“This explanation sounds like it was simple to figure out, but it was really difficult,” says De La Cruz, adding that the team worked on this study for several years.

The research team is now planning to use computer modeling to better understand the specific roles of the wiggly and stiff filament sections during the breaking process. They’ll test the modeling results with carefully designed lab experiments.

De La Cruz credits his success as a scientist to the mentors he’s had since his very first research experience in high school. “I’m an example of what can happen when good people take a genuine interest and care about you as a person.”

For the students and aspiring scientists working in his lab today, De La Cruz tries to do the same. He considers scientists’ most important job to be stimulating great minds to think independently and continue to grow, even if it’s sometimes through failure.

He tells them, “The future is in your hands more than you know.”