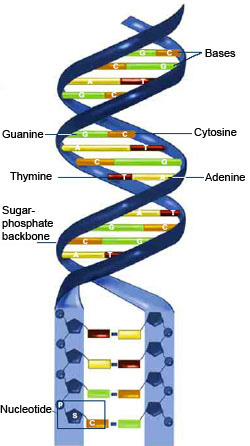 Humans begin as a single fertilized cell containing (with some rare exceptions) the full complement of DNA—the genome—arranged into 46 discrete chromosomes (23 pairs, with mom and dad each contributing half of each pair) in the cell’s nucleus. There are 6 feet of DNA coiled up tightly in that first cell. All the information in the DNA is replicated each time the cell divides. The amount of DNA packed into all of an adult’s cells is on the order of 100 trillion feet (about 19 billion miles)—so that if the DNA chain was stretched out, it would be long enough to reach back and forth between the Earth and the Sun more than 200 times.

Like any biochemical process, DNA replication is inherently prone to error. Some of the most common flubs happen when the same base is replicated several times in a row. For example, if there are many Ts in succession, the enzyme that builds new DNA molecules may accidentally drop or add a base. This kind of error is called a frameshift, and if not properly repaired it can have serious consequences; for example, frameshifts are implicated in cystic fibrosis and Tay-Sachs disease. However, polymerase error is only one source of mutation. It’s hard to put a firm number on mutation rates, because they can vary by gene, by cell type, and by person. 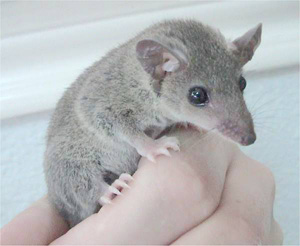 Damage to DNA can be brought on by a variety of factors, including ionizing radiation, such as that in X-rays, chemicals in tobacco smoke and ultraviolet (UV) radiation from sunlight. UV light in particular can cause adjacent bases on the same side of the DNA chain to stick together in an off-kilter pairing called a dimer, causing a kink in the DNA chain and halting replication. Many creatures, ranging from single-celled bacteria and some types of yeast to a variety of plants and insects, can self-repair UV-caused dimers through a process called photoreactivation, also known as light repair. Photoreactivation uses energy from visible light to directly break apart the dimers. Humans and most other mammals, however, do not have the necessary enzymes to perform this sort of direct DNA repair. One mammal that does use photoreactivation in response to UV damage is the South American gray short-tailed opossum

. (Bonus fact: This little opossum was the first marsupial to have its genome sequenced.) 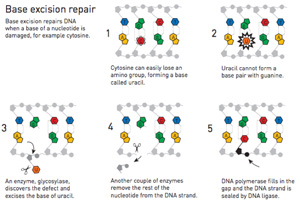 Fortunately, all organisms have ways to fix DNA damage that do not require sunlight, collectively referred to as dark repair. One method, base excision repair, kicks in when a single strand of the DNA helix is damaged. It involves a series of enzymes that first identifies the damaged or incorrectly placed base or nucleotide and then snips out the wrong bit and pastes in the correct base or nucleotide. 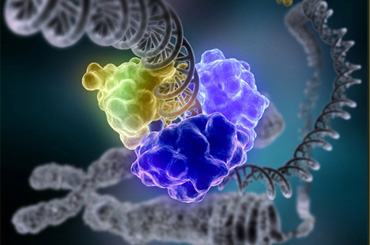 The 2015 Nobel Prize in chemistry honored research revealing how our cells repair damage to DNA using enzymes, such as the one shown here wrapping around the double helix. Without ways to fix damaged DNA, cells can malfunction, die or become cancerous. Credit: Tom Ellenberger, Washington University School of Medicine in St. Louis, and Dave Gohara, Saint Louis University School of Medicine.

A third repair mechanism corrects “mismatch errors” that occur when, for example, an A is matched with a C instead of the correct T. Mismatch repair is critical to correcting errors that arise when DNA is in the process of copying itself. Although scientists have not yet determined the full details of the human mismatch repair system, they estimate the process catches all but one out of every 1,000 or so mismatch errors.

In 2015, the Nobel Prize in chemistry was shared by NIGMS grantees Paul Modrich and Aziz Sancar, along with Tomas Lindahl, for their contributions toward understanding how these forms of DNA repair work.

6. There are many things we don’t know about DNA.

The DNA molecule was first isolated—from pus on discarded surgical bandages—in 1869 by the Swiss scientist Freidrich Miescher. Although researchers have learned a lot in the last 148 years about DNA’s structure and activity, much uncharted territory remains.

Take so-called junk DNA, which was estimated to account for 99 percent of DNA in the human genome. For years, this term was used to describe DNA that does not encode instructions for making proteins. Over the past several years, scientists have dropped the term as they’ve learned more about a big chunk of noncoding DNA that plays key roles in directing and regulating gene activity.

New technologies, including a suite of imaging tools collectively termed super-resolution microscopy, are allowing scientists to see cell contents and components (including DNA) at levels of resolution not available with light microscopy. The techniques are sure to bring new details about this foundational molecule into view. Still, there will always be further mysteries to probe. 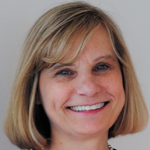