How the CRISPR System Works 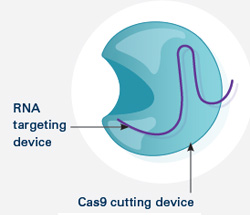 The CRISPR system has two components joined together: a finely tuned targeting device (a small strand of RNA programmed to look for a specific DNA sequence) and a strong cutting device (an enzyme called Cas9 that can cut through a double strand of DNA). 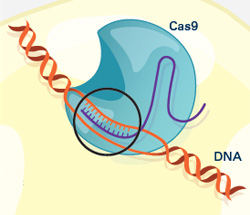 Once inside a cell, the CRISPR system locates the DNA it is programmed to find. The CRISPR seeking device recognizes and binds to the target DNA (circled, black). 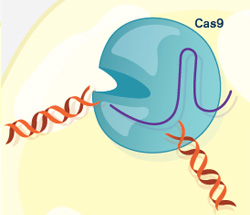 The Cas9 enzyme cuts both strands of the DNA. 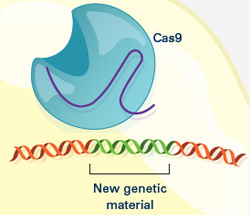 Researchers can insert into the cell new sections of DNA. The cell automatically incorporates the new DNA into the gap when it repairs the broken DNA. CRISPR has many possible uses, including: