Give up? It’s the sea lamprey. 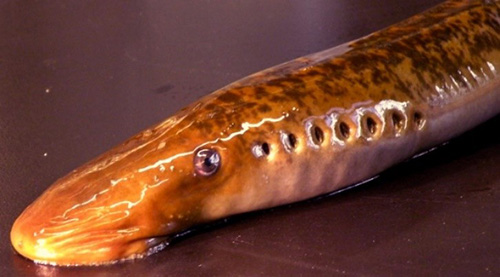 A direct descendant of one of the first organisms to develop a backbone, these remarkable creatures are considered “living fossils.” Best of all, they can regrow a severed spinal cord—a feat we humans can only dream about. Credit: Jeramiah Smith, University of Kentucky.

This leechlike creature has several unusual—and enviable—characteristics that make it an ideal research organism for a variety of scientific investigations.

Lampreys can do something no human has ever accomplished: repair a damaged spinal cord. Humans with spinal cord injuries are often paralyzed and lose bowel and bladder control. Lampreys, in contrast, can recover fully, even after their spinal cords are sliced clean through. Within 12 weeks, they’re swimming and functioning normally.

Genetically speaking, lampreys are also highly unusual. Most animals guard their genomes zealously, since altering a single letter of DNA code could cause a devastating genetic disease or set the stage for cancer. Lampreys, meanwhile, toss out 20 percent of their DNA while still embryos. The process is called programmed genome rearrangement (PGR). Some researchers suspect that it might help protect lampreys from cancer.

How can throwing away hundreds—or even thousands—of genes help prevent cancer? Here’s the thinking: All animals have genes used only during very early embryonic development, long before they develop tissues and organs. Most animals permanently switch off (“silence”) these genes once they no longer need them. Unfortunately, due to cellular errors, silenced genes can occasionally be switched back on. Reactivating certain silenced genes can contribute to developing cancer.

Rather than merely silencing unnecessary genes, lampreys permanently dispose of them. By doing so, they eliminate the risk of reactivating genes that could lead to cancer.

As a result of PGR, lampreys have two genomes. Their complete genome contains 99 pairs of chromosomes and is found only in eggs and sperm. The other genome, a slimmed-down, post-PGR version, is found in all other cells of the lamprey’s body.

Lampreys sit on an unusual branch of the evolutionary tree. Called jawless fish, they split off more than 500 million years ago from other vertebrates (the group of animals that includes mammals, bony fish, birds, and reptiles). Because they’re ancient members of the vertebrate family, lampreys can help scientists understand which genes and traits are essential to all vertebrates. The creatures also highlight which cellular processes—such as spinal cord regeneration and PGR—were lost during the evolution of most of the vertebrates. These lessons can provide new insights into the genetic rules of our own species.

One Reply to “Extreme Healing, Weird Genomics, and Bloodsucking Invaders”