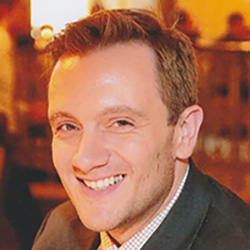 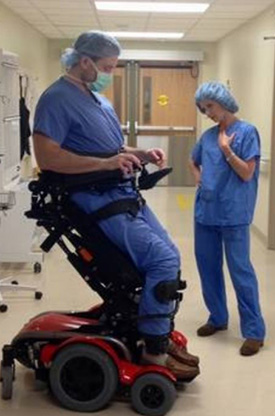 After the 2008 accident that left him paralyzed, McCulloh didn’t know how he would ever be able to perform surgery. But he found encouragement from the rehab physicians he worked with at Mount Sinai Hospital in New York City, as well as from several disabled physicians he met who had managed to succeed even before the 1990 Americans with Disabilities Act. He had never been one to back down from a challenge, so he headed to Case Western Reserve School of Medicine in Cleveland, Ohio, one of the schools that had accepted him before his accident. A plastic surgeon in Hawaii who also uses a wheelchair provided guidance to McCulloh about what he would need to do to become a surgeon, including finding and funding a standing wheelchair.

At Case Western, an encounter with a neurologist who worked with children inspired McCulloh to shadow a pediatric surgeon during his surgery rotation. By the end of that month, he had found his passion: performing life-saving surgery on children. It meant overcoming immense physical challenges and competing in one of the most sought-after specialties in medicine, but it was a dream he was determined to pursue.

Although squeezing in 2 years of postdoctoral research alongside a veteran pediatric surgeon isn’t a mandatory part of the road to pediatric surgery, 80 to 85 percent of those who successfully earn a surgery residency take that path.

That’s how McCulloh found his way to longtime NIGMS grantee Besner, despite having no prior research experience. After Besner hired him, she discovered that McCulloh qualified for an NIGMS diversity supplement. The grant kickstarted McCulloh’s research and allowed him to attend conferences where he could network and present his award-winning findings.

Besner’s lab focuses on necrotizing enterocolitis (NEC), a disease that attacks the bowel and is a leading cause of death for premature infants. McCulloh chose to pursue findings from Besner’s lab suggesting that stem cells may protect against NEC. Using a NEC rat model, McCulloh tested whether certain types of stem cells were more effective than others. Four looked promising: mesenchymal stem cells derived from amniotic fluid and from bone marrow, and neural stem cells derived from amniotic fluid and from the neonatal gut.

However, using stem cells in premature babies raises potential problems, which include stimulating tumor growth. McCulloh examined whether he could get a similar effect using a product secreted by stem cells. He studied exosomes—messenger particles that leave the cell that created them and enter other cells. McCulloh separated exosomes from the various types of stem cells and injected them into NEC-afflicted rats. He discovered that exosomes were just as effective as stem cells against NEC. Besner’s lab also tracked their progress to see where they ended up and found exosomes in highest concentrations in damaged tissue, giving even more weight to the idea that they support healing.

“These findings support the potential for a noncell-based therapy for NEC in the future,” says Besner.

As for McCulloh, though he’s still passionate about surgery, he’s discovered a new outlet in Besner’s lab. “I find myself looking at problems I encounter clinically and thinking about how I could do a study to solve them,” he says. “My plan right now is to get through my residency and a pediatric fellowship, but then there’s a good chance I’ll start up my own lab. It feeds a need I have to find solutions to problems.”