“For me, science is the perfect way to harmonize creative thinking and critical thinking,” says Marcos Ramos-Benítez, Ph.D., a fellow in the NIGMS Postdoctoral Research Associate Training (PRAT) program.

Dr. Ramos-Benítez researches interactions between pathogens—such as the viruses that cause Ebola and COVID-19—and their hosts. He’s also the founder and president of Ciencia en tus Manos (“Science in Your Hands”), a nonprofit organization that presents scientific information in Spanish and aims to provide a community to support the next generation of scientists.

Growing up in a small town in Puerto Rico, Dr. Ramos-Benítez always did well in school, which led teachers and family to encourage him to pursue a career in medicine. He started by studying biology at the University of Puerto Rico, Humacao.

There, he befriended people who were actively pursuing research careers. “By communicating with them, having them as a support system, and taking classes with them, I became involved in research opportunities,” Dr. Ramos-Benítez says. “And that’s where I fell in love with science.”

During his senior year, he began volunteering in the lab of Ana Espino, Ph.D., at the University of Puerto Rico, Medical Sciences Campus. Dr. Espino became Dr. Ramos-Benítez’s advisor as he pursued a Ph.D. in biomedical sciences, studying the anti-inflammatory effects of a protein produced by a parasite.

In 2017, Hurricane Maria devastated Puerto Rico, interrupting Dr. Ramos-Benítez’s research and making it impossible to work in the lab. Through a community of Puerto Rican scientists called CienciaPR, he learned that the University of California, Davis, was hosting students affected by the hurricane and arranged to continue his research there for several months. “That time helped me a lot in how independent I was as a researcher,” he says. “It was a challenge that I had to step into, and it prepared me so well for my next step, which was coming to the NIH.”

After completing his Ph.D. in 2018, Dr. Ramos-Benítez applied for and received a PRAT fellowship to work in the lab of Daniel S. Chertow, M.D., and study how the Ebola virus causes diarrhea. Understanding this mechanism could help researchers develop new therapies for Ebola patients. The NIGMS PRAT program is a competitive 3-year postdoctoral fellowship program that accepts applications each year from early September through early October. More information can be found on the PRAT program webpage.

When the COVID-19 pandemic began in early 2020, Dr. Ramos-Benítez felt compelled to help. He researched the role of circulating neutrophil extracellular traps in COVID-19; these structures help fight pathogens, but they can also contribute to blood clots. He also worked on a drug study, multiple case reports, and research on how COVID-19 affects different organs.

“In my mind, at least, the importance of research in people’s day-to-day lives has never been so exemplified as during the pandemic,” Dr. Ramos-Benítez says. “You could see how a basic science observation, something that was done in the lab, could translate in a matter of weeks into a public health recommendation and then shape how people were behaving.”

The COVID-19 pandemic led Dr. Ramos-Benítez to establish Ciencia en tus Manos as a nonprofit. The organization originated from a Facebook page of the same name that he started in 2016 with the goal of providing public-friendly scientific information in Spanish. There, he combined his scientific expertise and creativity to produce eye-catching, informative infographics and other content.

In July 2020, Dr. Ramos-Benítez created and posted a Spanish-language infographic about COVID-19 testing that proved incredibly popular. More than 1,200 people shared the original post, and Puerto Rican newspapers and TV newscasts picked it up and extended its reach even further. 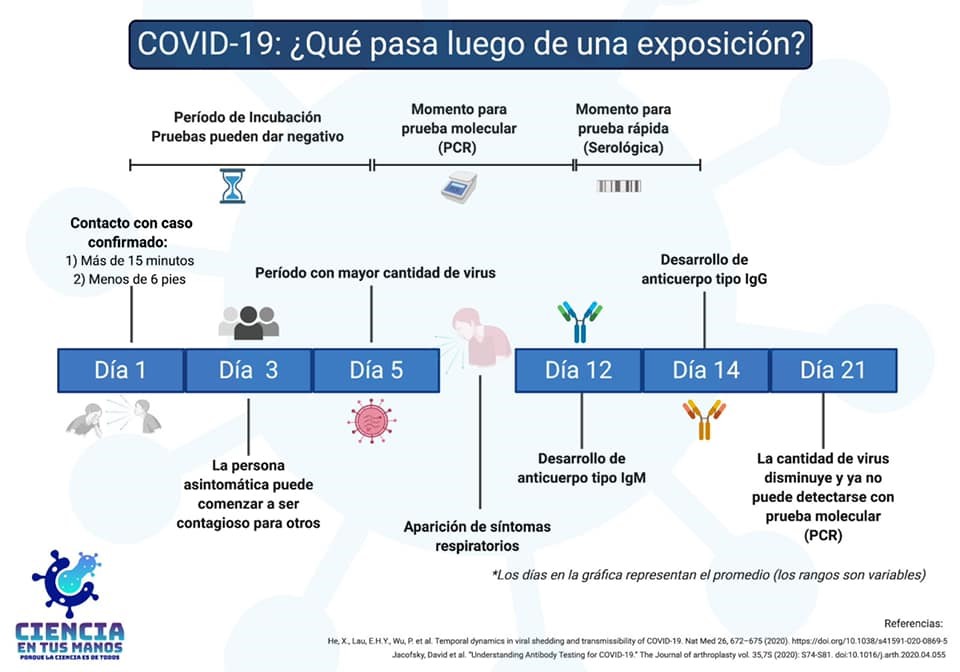 The popularity of the infographic and other posts related to COVID-19 underscored for Dr. Ramos-Benítez the need for accurate, easy-to-understand scientific information in Spanish. He gathered a team of scientists interested in addressing that need to form a board for Ciencia en tus Manos, and they began creating more content.

They also developed programs for students in high school through graduate school, focusing on those in Puerto Rico. Offerings from Ciencia en tus Manos have included webinars on careers in engineering and on how to participate in a science fair as a student. Collectively, these webinars had about 1,200 attendees. In early 2021, Ciencia en tus Manos started a program that trains high school and undergraduate students to read scientific literature and explain it in clear and engaging ways to the general public.

Dr. Ramos-Benítez wants his organization to be a community of researchers and students that helps aspiring scientists reach their goals. “Ciencia en tus Manos started as a way for me to communicate what I was thinking about different science topics, and it slowly evolved into what I think is the most important aspect of my professional career,” he says.

In addition to growing the organization, one of Dr. Ramos-Benítez’s biggest goals is to run his own research program. He hopes to continue focusing on interactions between pathogens—especially viruses—and their hosts to develop medicines with fewer side effects. “There are a lot of ways to make an impact in life, and having a research program is a really good one. You can influence and support people who work with you in the lab, but also, you can make a difference in the community through your research,” he says.