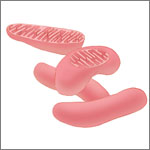 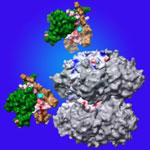 Many microorganisms can sense whether it’s day or night and adjust their activity accordingly. In tiny blue-green algae, the “quartz-crystal” of the time-keeping circadian clock consists of only three proteins, making it the simplest clock found in nature. Researchers led by Carl Johnson of Vanderbilt University recently found that, by manipulating these clock proteins, they could lock the algae into continuously expressing its daytime genes, even during the nighttime.

Why would one want algae to act like it’s always daytime? The kind used in Johnson’s study is widely harnessed to produce commercial products, from drugs to biofuels. But even when grown in constant light, algae with a normal circadian clock typically decrease production of biomolecules when nighttime genes are expressed. When the researchers grew the algae with the daytime genes locked “on” in constant light, the microorganism’s output increased by as much as 700 percent. This proof of concept experiment may be applicable to improving the commercial production of compounds such as insulin and some anti-cancer drugs. 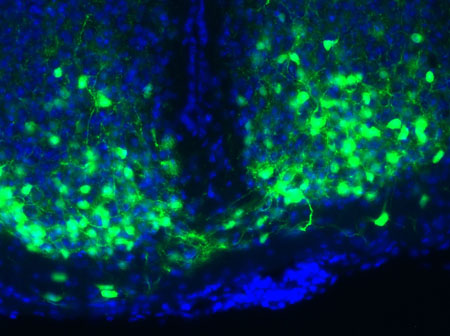 Master clock in mouse brain with the nuclei of the clock cells shown in blue and the VIP molecule shown in green. Credit: Cristina Mazuski in the lab of Erik Herzog, Washington University in St. Louis.

Our biological clocks play a large part in influencing our sleep patterns, hormone levels, body temperature and appetite. A small molecule called VIP, shown in green, enables time-keeping neurons in the brain’s central clock to coordinate daily rhythms. New research shows that, at least in mice, higher doses of the molecule can cause neurons to get out of synch. By desynchronizing mouse neurons with an extra burst of VIP, Erik Herzog of Washington University in St. Louis found that the cells could better adapt to abrupt changes in light (day)-dark (night) cycles. The finding could one day lead to a method to reduce jet lag recovery times and help shift workers better adjust to schedule changes. The identities of the proteins that drive insulin production and release from pancreatic beta cells have largely been a mystery. In new work from the lab of William Balch of the Scripps Research Institute, researchers isolated and then identified all the insulin-bound proteins from mouse beta cells. The results provided a roadmap of the protein interactions that lead to insulin production, storage and secretion. The researchers used the roadmap to identify a protein called TMEM24, which was abundant in beta cells and binds readily to insulin. Balch and his team uncovered that TMEM24, whose involvement in insulin secretion was previously unknown, effectively regulates slower insulin release and could have a key role in maintaining control of glucose levels in the blood. The scientists hope that this roadmap of insulin-interacting proteins will lead to the development of new, targeted approaches to treating type 2 diabetes and a similar insulin-related condition called metabolic syndrome.

A new study from Peter Devreotes

and other scientists at Johns Hopkins University sheds light on the way in which cells get around the body to promote embryo development, wound healing and even cancer metastasis. Here’s how they describe cell movement and their findings:

Think of the cell as a rowboat. Sensor proteins on the outside pass on directional signals to messenger proteins that serve as the cell’s coxswain. The coxswain then commands other members of the molecular crew to stay in sync, propelling the cell forward. If there are no sensor signals, the coxswain can still coordinate the cell’s movement, just not in any specific direction—it’s like a boat without a rudder.

Scientists previously thought that the messenger proteins needed the sensor ones to produce both directional and random movements. Because defects in the messenger proteins have been linked to many types of cancer, the new work suggests these molecules could serve as a drug target for immobilizing tumor cells. 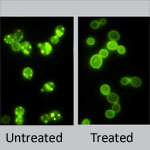