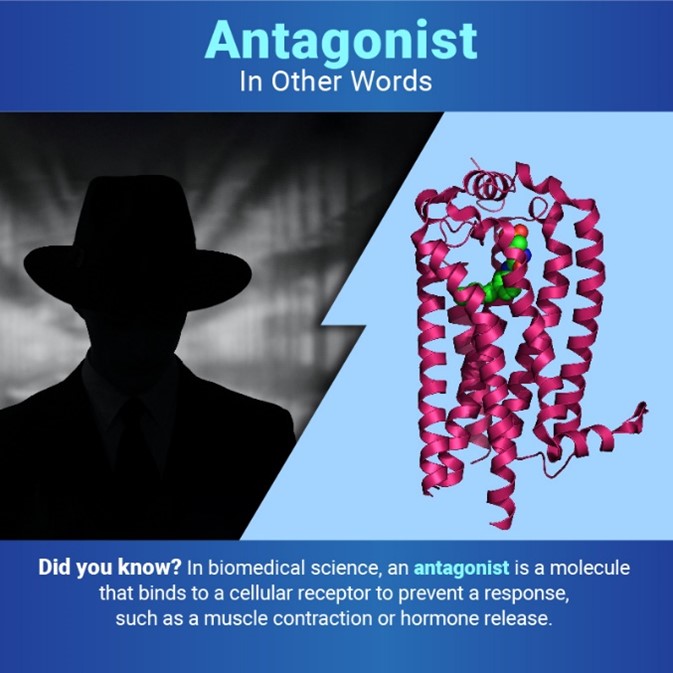 Many of us learned in English class that an antagonist is a person or thing that a hero fights. But in biomedical science, an antagonist is a molecule that binds to a cellular receptor to prevent a response, such as a muscle contraction or hormone release. Antagonists can be important medical treatments, like the antagonist naloxone—also known as Narcan —that can reverse an opioid overdose.

The two main types of antagonists—competitive and noncompetitive—are named for their relationships to agonists, which are molecules that activate cellular responses. Our bodies naturally produce agonists to control various functions, and many medicines are also agonists that mimic these endogenous molecules.  For example, our bodies have opioid receptors that can be activated to relieve pain by both natural agonists called endorphins as well as opioid drugs.

Along with antagonists such as naloxone and ketamine, even dangerous ones can offer potential benefits or insights to health. For instance, a plant extract called curare—an antagonist that can paralyze muscles involved in movement and breathing—was traditionally used to create lethal poison arrows. Studies of curare, however, enabled scientists to develop muscle relaxants that made surgery easier and safer. It seems even villainous antagonists may have a bit of hero in them, after all.

One Reply to “In Other Words: Some Antagonists Are Heroes”