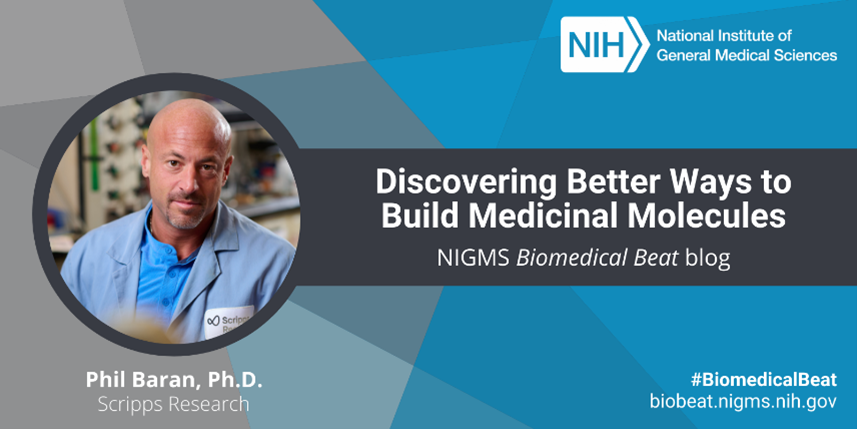 “I love the mystery of chemistry. It explores the great unknown of the universe,” says Phil Baran, Ph.D., a professor of chemistry at Scripps Research, La Jolla, California. His passion for the subject catalyzed a successful career in organic synthesis—building molecules that are the foundation of living things and can be developed as medicines.

Setting His Sights on Science

School didn’t interest Dr. Baran until he found chemistry in 10th grade. “From there, the mission was clear: do whatever was required to do chemistry for the rest of my life,” he says. At the time, that meant achieving certain grades, so he focused on improving his academic performance. He also took courses at a community college and graduated with his high school diploma and associate degree simultaneously.

Dr. Baran then enrolled at New York University as a junior, majoring in chemistry. During his first semester, he asked David Schuster, Ph.D., about doing research. When Dr. Schuster said he didn’t usually take students at such an early stage of their education, Dr. Baran replied, “If you give me this chance, I won’t let you down.” He worked in the Schuster lab for the rest of his undergraduate career, and the experience inspired him to focus on organic synthesis in graduate school.

Dr. Schuster’s mentorship also had other meaningful impacts. “I came from a very troubled background, and Dr. Schuster helped me gain life skills I didn’t really learn at home,” Dr. Baran says. He recalls that Dr. Schuster encouraged him to take time away from his studies and lab work, which consumed much of his time, to socialize. As one way of getting Dr. Baran out of the lab, Dr. Schuster sometimes took him to play racquetball, and it was during a game that Dr. Schuster was the first to notice Dr. Baran had poor vision. Based on his recommendation, Dr. Baran saw an eye doctor and received the help he needed.

After completing his bachelor’s degree, Dr. Baran entered a Ph.D. program at Scripps and worked in the lab of K. C. Nicolaou, Ph.D. He went on to take a postdoctoral position in the lab of Nobel laureate E. J. Corey, Ph.D., at Harvard University, Cambridge, Massachusetts.

In 2002, Dr. Baran returned to Scripps to present his postdoctoral work, and the institute surprised him by offering him an assistant professorship starting in 2003. He was just 25 years old and hadn’t planned on becoming a professor. “I was terrified. I didn’t think I was good enough,” Dr. Baran says. “But I always think if an opportunity terrifies you, then you should probably take it.”

Supporting the Development of Medicines and Mentees

Dr. Baran’s research focuses on finding the simplest ways to build useful organic molecules. His lab has developed efficient methods for making compounds with potential pharmaceutical applications, including some known to combat bacteria, viruses, and tumors, as well as a steroid used to treat heart failure. Dr. Baran has also developed many useful
reagents—compounds that trigger chemical reactions or test if they’ve occurred. For example, one of his reagents was used in the discovery phase that led to the COVID-19 drug Paxlovid.

Another of Dr. Baran’s achievements is his work on antisense oligonucleotides (ASOs), which are short, single-stranded pieces of DNA or RNA that can bind specific RNA and stop them from working. ASOs are chiral molecules, which means two can have the same sequence of bonded atoms but different 3D orientations. It’s just like your hands, which have the same order of fingers but are mirror images of one another and can’t be superimposed (identically matched when laid on top of one another).

Scientists have and are continuing to develop ASOs as medicines. However, usually only one of the possible thousands of 3D shapes is effective as a medicine, and synthesizing ASOs with a single 3D shape has been a challenge. Together with the pharmaceutical company Bristol-Myers Squibb, Dr. Baran’s lab developed a reagent system that not only allows chemists to synthesize ASOs in a single 3D shape but also increase their overall stability by tweaking their backbone. This advance could open the door for the development of new ASOs as medicines.

Dr. Baran wants to continue evolving his research in new directions. “It’s my hope that a student who leaves the group will come back in 5 years and not really recognize anything that’s going on,” he says. This research and training mission is supported by a Maximizing Investigators’ Research Award from NIGMS—a type of grant that provides stable and flexible funding for a program of research that falls within the Institute’s mission.

Dr. Baran has received many accolades for his scientific achievements, but he says the accomplishment he’s proudest of is mentoring students who have become successful scientists. He believes a love of research is crucial to thriving in a scientific career and encourages his mentees to think about whether working in the lab brings them happiness. “There are a million things you can do with your life,” he says. “You should pursue something that makes you happy.”