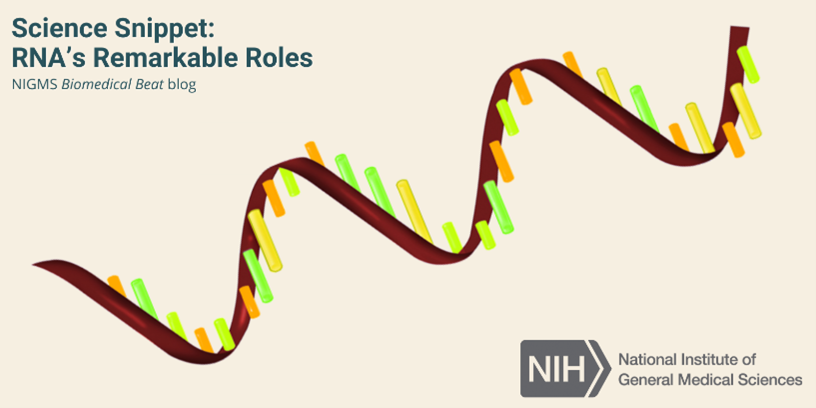 Proteins are essential for virtually every process in our bodies, and without RNA, they wouldn’t be made.

In addition to the RNA molecules involved in protein synthesis, our cells create other types of RNA that play a range of roles. For example, some act like enzymes, speeding up chemical reactions, while others regulate gene expression.

Researchers have developed tools to read the nucleotide sequences of RNA molecules. By determining which RNA molecules cells are building, scientists can tell which genes are being expressed. Researchers can compare gene expression information from people with and without a disease to better understand the effects of the disease at the cellular level. This understanding can also support the development of diagnostic tools and therapeutic treatments.

In addition, RNA can be used to help protect against disease, as demonstrated by the COVID-19 mRNA vaccines. These vaccines contain mRNA that codes for a specific protein—called the spike protein—of the virus that causes COVID-19. Just as they do with our own mRNA, our cells translate this vaccine mRNA to produce the encoded protein, in this case spike proteins. The proteins can’t cause COVID-19 by themselves, but the immune system recognizes them as foreign and creates targeted antibodies to attack them. Even after the proteins are destroyed, specialized immune cells “remember” the spike protein. If the virus that causes COVID-19 enters a vaccinated person’s body, the immune system reacts with antibodies that defend against infection more swiftly than it could if it had never seen the spike protein.

Many scientists supported by NIGMS study RNA. Some of these researchers are: