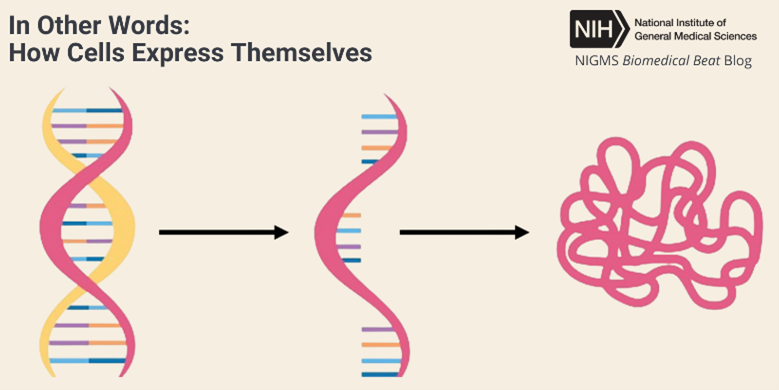 When you encounter the word expression, you may think of a smile, a grimace, or another look on someone’s face. But when biologists talk about expression, they typically mean the process of gene expression—when the information in a gene directs protein synthesis. Proteins are essential for virtually every process in the human body.

How to Build a Protein

Gene expression has two main steps: transcription and translation. In transcription, RNA polymerase separates a section of double-stranded DNA to access a gene. Then it copies the information from the gene to create messenger RNA (mRNA) from building blocks called nucleotides.

In translation, the mRNA created during transcription passes through a cellular “machine” called a ribosome. The ribosome reads the sequence of nucleotides to build a protein out of amino acids.

A human cell expresses only a fraction of its genes at any given time. One reason is that almost every cell in a person’s body contains their entire genome, which has instructions for building the full catalog of proteins their body needs. And since each type of cell needs only some of these proteins, they don’t waste energy creating proteins that aren’t useful to their specific function. For instance, only red blood cells produce hemoglobin, a protein that transports oxygen from the lungs to the rest of the body.

Cells have several proteins that are responsible for regulating gene expression. Mutations or underexpression of these proteins can lead to several rare diseases, including CHOPS syndrome, Coffin-Siris syndrome, and Rubinstein-Taybi syndrome.