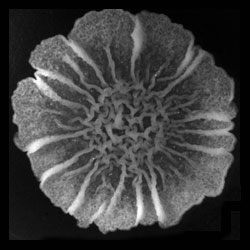 and colleagues at the University of California, San Diego, that bacterial cells in tight-knit microbial communities called biofilms expand in a stop-and-go pattern. The researchers concluded that this pattern helps make food at the nutrient-rich margin available to the cells in the starved center, but they didn’t know how. They’ve now shown that the cells use electrochemical signaling to communicate and cooperate with each other.

Because nutrients and other signals cells use to sense each other and their environment move rather slowly, the researchers looked for a faster, more active communication system in biofilms of the bacterium B. subtilis. They focused on electrical signaling via potassium, a positively charged ion that, for example, our nerve and muscle cells use to send or receive signals.

The research team found that the biofilm cells starved of a negatively charged small molecule, glutamate, released potassium ions through specialized channels in the cell membrane. This potassium release changed the electrical charge across the membrane. In response to this change, neighboring cells also released potassium, setting off a fast-moving chain reaction that propagated the electrical signal across millions of cells within the biofilm.

The new insights into how bacterial cells coordinate their growth, published last month in Nature, will help scientists find better ways to stop or prevent biofilm formation. Biofilms are a concern in both sanitation and medicine because they shelter harmful bacterial cells from the actions of chemicals and antibiotics.

Süel and his team now want to pursue more deeply the connection between metabolism and electrophysiology and to investigate other roles electrical signaling may play in biofilm communities.

One Reply to “Bacterial Biofilms: A Charged Environment”