Our sense of touch provides us with bits of information about our surroundings that inform the decisions we make. When we touch something, our nervous system transmits signals through nerve endings that feed information to our brain. This enables us to sense the stimulus and take the appropriate action, like drawing back quickly when we touch a hot stovetop.

Bacteria are single cells and lack a nervous system. But like us, they rely on their “sense” of touch to make decisions—or at least change their behavior. For example, bacteria’s sense of touch is believed to trigger the cells to form colonies, called biofilms, on surfaces they make contact with. Bacteria may form biofilms as a way to defend themselves, share limited nutrients, or simply to prevent being washed away in a flowing liquid.

Humans can be harmed by biofilms because these colonies serve as a reservoir of disease-causing cells that are responsible for high rates of human infection. Biofilms can protect at least some cells from being affected by antibiotics. The surviving reservoir of bacteria then have more time to evolve resistance to antibiotics.

At the same time, some biofilms can be valuable; for example, they help to break down waste in water treatment plants and to drive electrical current as part of microbial fuel cells.

Until recently, scientists thought that bacteria formed biofilms and caused infections in response to chemical signals they received from their environments. But research in 2014 showed that the bacterium Pseudomonas aeruginosa could infect a variety of living tissues—from plants to many kinds of animals—simply by making contact with them. In the past year, multiple groups of investigators have learned more about how bacteria sense that they have touched a surface and how that sense translates to changes in their behavior. This understanding could lead to new ways of preventing infections or harmful biofilm formation. 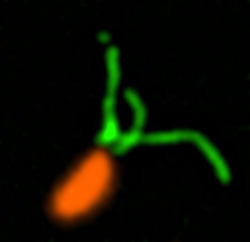 Pili (green) on cells from the bacterium Caulobacter crescentus (orange). Scientists used a fluorescent dye to stain pili so they could watch the structures extend and retract. Credit: Courtney Ellison, Indiana University.

When they first make contact with a surface, bacteria change from free-ranging, swimming cells to stationary ones that secrete a sticky substance, tethering them in one place. To form a biofilm, they begin replicating, creating an organized mass stable enough to resist shaking and to repel potential invaders (see https://biobeat.nigms.nih.gov/2017/01/cool-image-inside-a-biofilm-build-up/).

How do swimming bacteria sense that they have found a potential surface to colonize? Working with the bacterium Caulobacter crescentus, Indiana University Ph.D. student Courtney Ellison and her colleagues, under the direction of professor of biology and NIGMS grantee Yves Brun, recently showed that hair-like structures on the cell’s surface, called pili, play a role here. The researchers found that as a bacterial cell swims in a fluid, its pili are constantly stretching out and retracting. When the cell makes contact with a surface, the pili stop moving, start producing a sticky substance and use it to hold onto the surface.

To watch what the pili were doing, the Brun team tagged the tiny structures with fluorescent dye so that they would light up when imaged. The researchers also attached a large molecule to some pili to prevent them from retracting. Most of the cells with these large-molecule bound pili were fooled into secreting their adhesive substance, even though they were not in contact with a surface. The scientists believe that when the bacterium tries and fails to retract its pili, the tugging or tension triggers the signal that causes the cell to start attaching to the surface. This finding may eventually lead to new drugs that can trick bacteria into not initiating infection or aggregating into biofilms.

Swimming bacteria have another outer structure that also could be involved in sensing a surface. Urs Jenal

and colleagues at the University of Basel, Switzerland, also studied Caulobacter crescentus and the action of its flagellum, a rotating tail that powers the bacterium around like a propeller. The flagellum extends from one end of the swimming cell and works in tandem with the pili. In a result mirroring that of Brun’s team, Jenal and his team concluded that when a cell’s flagellum touches a surface and can no longer rotate, the motor inside the cell that powers the flagellum stops, providing the signal to start attaching.

Whether the pili or the flagellum motor lies behind the cell’s ability to sense a surface may depend on surrounding conditions. According to Brun, “The more we know about the mechanism of surface adhesion, the more we will be able to design strategies to inhibit adhesion.”

Interfering with bacteria’s sense of touch and preventing their colonization instead of killing them with antibiotics could help prevent antibiotic resistance. The strategy could ward off infection before it even starts. 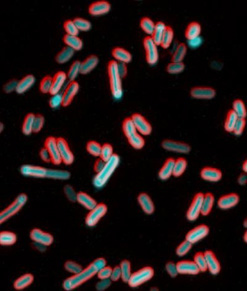 Besides reacting to signals from their flagella or pili, bacteria have another means for reacting to surface touch, one that closely mimics our own. It is based on electrical signals inside the cell.

and colleagues from the University of Colorado, Boulder, are finding that bacteria sense touch using electrical signals. Studying E. coli, Kralj and his team found that these electrical signals arise from the flux of calcium ions into and out of the cell. Such signals are used to convey information in nerve cells.

According to Kralj, this kind of signaling in response to touch could trigger more than just biofilm formation. Bacteria may use this sense to identify a food source or another cell, such as an enemy. They also might use electrical signaling to recognize how many of their own kind are in the surrounding area.

When an E. coli bacterium was touched, the cell sent out an electrical pulse, opening channels in its membrane and allowing calcium ions to flow into it. Higher calcium concentrations can set off several cellular changes, including speeding the movement of the flagella and ramping up the production of proteins that bacteria use in the infection process. Indeed, Kralj and his team saw that E. coli’s response to being touched triggered changes in levels of a pathogenic protein inside the bacterial cells.

Kralj’s team believes the electrical-signal response to touching a surface could tell the bacterium to get ready for a change in its activity. Although bacteria are known to respond this way to chemical signals, scientists had not previously seen them respond to an electrical one.

For Kralj, the most exciting aspect of his team’s work is the fact that E. coli can use electrical signaling the way higher organisms do. “This finding places electrically excitable behaviors WAY back in the evolutionary tree and suggests that every organism has the potential to use voltage to sense and react to its environment,” he said. The sense of touch has certainly kept its value over all that time.

To learn more about Kralj’s research, including his efforts to identify all of the genes involved in electrical signaling in the body, see “Interview With a Scientist: Joel Kralj, Electromicist.”