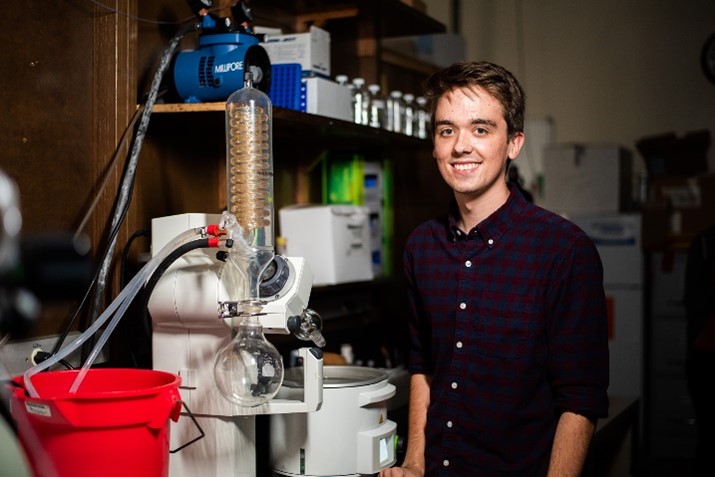 Caleb standing in front of a rotary evaporator used to remove solvents from samples through evaporation. Credit: Pittsburg State University.

Even though Caleb and Adam had heard about Dr. Santra’s research through their older brother, they were officially introduced to the Polymer Chemistry Initiative at Pittsburg State on a tour with their high school science teacher. During the tour, they learned about available summer internships through the Polymer Chemistry Initiative. They both applied and were accepted into the internship program, and they started in research labs the summer after graduating high school.

The steps in developing the nanoparticle-based drug delivery system.

After the internships ended, Caleb and Adam joined Dr. Santra’s lab through the K-INBRE program. In their early days, they shadowed Paul to learn how to do calculations, accurately weigh their starting materials, run the reactions, purify their products, and clean the glassware at the end. These steps might sound trivial, but to recent high school graduates who hadn’t taken any organic chemistry classes, it was all an on-the-job learning experience.

All three brothers are now working on the nanoparticle-based drug delivery system project Paul previously began in Dr. Santra’s lab. They’re creating a polymer, which is a large molecule formed by combining small molecules (monomers) in a simple repeating pattern. This particular polymer has a branched, 3D design—described by Dr. Santra as a soccer ball-like structure—that can encapsulate chemotherapeutic drugs and carry them specifically to cancerous cells so the drugs don’t harm other healthy cells. The first stage of this process is creating the 3D polymer through chemical synthesis. Next is encapsulating the drug within the polymer, followed by conjugating ligands—or attaching molecules that target specific receptors on cancer cells to the outside of the polymer. Once the drug delivery system is complete, it’s tested in cancer cells.

The brothers are finishing up the first stage of the project and have a system in place where they each play a specific role. Caleb runs the initial organic reactions, and Adam purifies the products. They start with something commercially available and change different parts of it over the course of four steps to make the final monomer. They then pass the monomer off to Paul, who polymerizes it and runs the chemical analyses to confirm the structure and purity of the final polymer. Next, they’re looking forward to completing the last two steps of the process so they can then learn about cell culture and test their final product.

The ultimate scientific goal of Dr. Santra’s “benchtop-to-bedside” lab is to create a precision medicine delivery system that can be personalized to the cancer patients no matter the drug or the cancer. But his commitment to training up the next generation of scientists is clear. His students are gaining invaluable hands-on experience ranging from organic synthesis, nanotechnology, and formulation science to cell biology and cell culture. Dr. Santra credits the K-INBRE with the ability to support research students like the Worsleys in his lab.

The Worsley brothers are working together in a way that many families don’t get to. Paul sums up their feelings when he says, “We’re just really thankful to work with Dr. Santra and for all the great opportunities from K-INBRE. When I came to Pitt State, I had no idea all this existed. I had no idea that, in Pittsburg, Kansas, we’d be solving cancer. Just to be a part of it is so cool. And to have my brothers along with me is something really special.”

The K-INBRE program is supported by NIGMS grant P20GM103418. 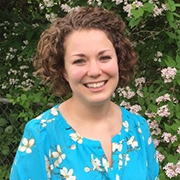