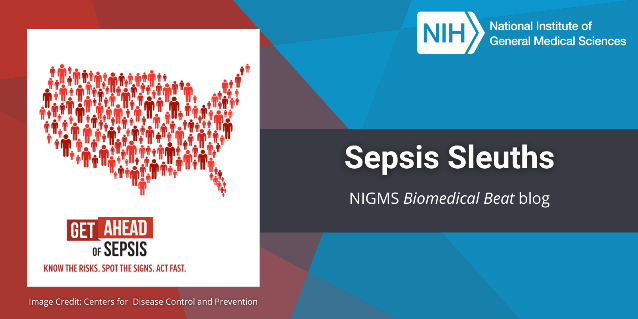 Sometimes we can be our own worst enemies without even realizing it. One devastating example is sepsis: our body’s overwhelming or impaired immune response to an insult—usually an infection or an injury to the body. According to the Centers for Disease Control and Prevention
(CDC), sepsis affects at least 1.7 million people in the United States each year, and it can lead to tissue damage, organ failure, and death. (See our sepsis fact sheet for more information.)

Sepsis is complex and not well-understood, so it’s challenging to diagnose and treat. NIGMS, along with its other NIH and Department of Health and Human Services partners, supports many researchers who are studying sepsis to increase our understanding of the condition and ultimately help patients. In honor of September being Sepsis Awareness Month, we highlight the work of three scientists who study sepsis and the immune system.

The immune system has many components that interact in a multitude of ways, and factors like sleep and physical activity can affect how it functions. Thanks to modern technology, researchers can collect a vast array of data from many people about the immune system and what influences it. However, these large datasets can make finding useful patterns an enormous, if not impossible, undertaking for a person.

Nima Aghaeepour, Ph.D., an associate professor at Stanford University School of Medicine in Stanford, California, is using artificial intelligence and machine learning to analyze these massive amounts of immune system data and build algorithms to identify patients who are likely to develop sepsis or other conditions. “Ultimately, I hope to create a platform that helps us predict what’s going to happen to a patient and suggest interventions that can modulate their immune system to prevent adverse outcomes,” he says.

Dr. Aghaeepour started college as a computer science major and worked with a team building soccer-playing robots. Before graduating, he decided that he wanted to have a more direct impact on human lives, and he set out to use his computational skills to study biological and medical questions. In addition to researching sepsis, Dr. Aghaeepour’s Maximizing Investigators’ Research Award provides him with the flexibility to apply his research of identifying immune system changes to medical matters such as pregnancy complications, surgical recovery, and stroke recuperation.

We typically have mutually beneficial relationships with the microorganisms that live in our bodies. However, sometimes a stressor such as illness or surgery can agitate normally harmless bacteria or other microbes, leading them to contribute to infection and sepsis. John Alverdy, M.D., the Sara and Harold Lincoln Thompson Professor of Surgery at the University of Chicago Medicine in Illinois, has dedicated his career to better understanding this phenomenon and finding ways to prevent it.

Dr. Alverdy has shown that when the body experiences stressful conditions, some bacteria can sense and respond to certain molecules produced by the immune system in ways that can harm their hosts. He’s also found that providing particular nutrients to microbiota can help prevent these responses. Based on those and other findings, Dr. Alverdy is developing ways to prevent sepsis in high-risk patients. “I want to come up with strategies that preserve the growth and helpful functions of normal microbiota while keeping them from responding in harmful ways under stressful conditions,” he says.

Dr. Alverdy was inspired to study sepsis during his medical residency training, when he first saw its devastating effects on patients and realized how much wasn’t understood about the condition. He says that he’s always been the type of person who enjoys making sense of challenging puzzles.

Sepsis is a common trigger of chronic critical illness—ongoing severe sickness often linked to immune system dysfunction that keeps patients in the intensive care unit (ICU) for 2 weeks or more. Doctors don’t currently have targeted treatments for chronic critical illness or a way to predict who will develop it. Vanessa Nomellini, M.D., Ph.D., an associate professor at the University of Texas Southwestern Medical Center in Dallas, hopes to change that.

Dr. Nomellini is gathering immunological information from blood samples of ICU patients over the course of their hospital stays, searching for data points associated with the development of chronic critical illness. She’s also using models of chronic critical illness to test various therapies. “The ultimate goal is the ability to measure a person’s immune response, determine what therapy they need based on that, and then to deliver it,” she says.

While earning her Ph.D., Dr. Nomellini researched the relationship between burns, age, and the immune response. Then she discovered a passion for treating ICU patients during her medical residency training. Dr. Nomellini says that it seemed natural to combine her interests in the immune system and critical care medicine when she started her lab. She believes that collaboration in this type of research is essential. “Chronic critical illness and sepsis are so complicated that it will take all types of people coming from different perspectives to figure this out,” she says.