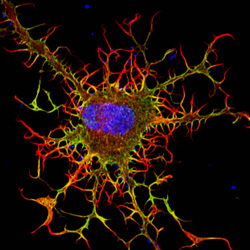 The cell skeleton, or cytoskeleton, is the framework that gives a cell its shape, helps it move and keeps its contents organized for proper function. A cell that lacks a cytoskeleton becomes misshapen and immobile. This fibroblast, a cell that normally makes connective tissues and travels to the site of a wound to help it heal, is lacking a cytoskeleton. Researchers have associated faulty cytoskeletons and resulting abnormal cell movement with birth defects and weakened immune system functioning. See fibroblasts with healthy skeletons.
Guts and Bugs 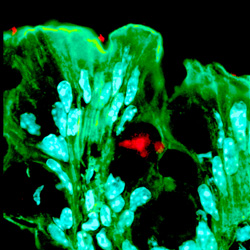 Our guts house tiny microbes, many of which help us stay healthy through the chemical signals they release. By some estimates, gut bacteria outnumber our own cells by 10 to 1. Many microbes residing in our intestines influence our metabolism, our immune system and even our behavior. To study complex microbe-host interactions, researchers use model organisms, such as mice. This image shows a bacterium called Bacteroides fragilis (stained red in the center) living in a channel among colon cells of a mouse (shown as green, leaflike structures containing elliptical cell nuclei shown in light blue). Because changes in the numbers and composition of gut bacteria can contribute to conditions like obesity, asthma and cardiovascular disease, visualizing where in the gut a microbe lives can help researchers pinpoint how it influences the health of its host.
Spider Web-Like Nerve Cells 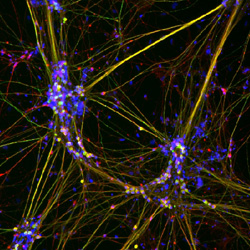 Nerve cells, or neurons, transmit signals between the different parts of our body often over long distances. These cellular networks look like spider webs because neurons physically connect to each other via long, threadlike extensions. Interconnected neuron webs enable us to sense our environment, control the muscles in our limbs and organs, and process information in our brains. This image shows a web of neurons that scientists have grown from human embryonic stem cells, which can become just about any cell in the body. Stem cell-grown specialized nerve cells might in the future be used to repair damaged nerves, for example, in the spine, brain or limbs.
Cell Death 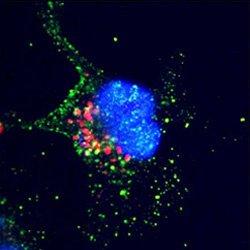 Programmed cell death, or apoptosis, is a normal part of an organism’s development and activity. It starts when signals from inside or outside a cell set off a series of orderly steps that cause the cell to self-destruct. Apoptosis prevents damaged, unneeded or potentially harmful cells from malfunctioning or from growing and dividing unchecked. In this image, a cell has produced too much of a certain protein (red dots to the left of the cell nucleus, a round structure stained in blue in the center), which has triggered the production of another protein (green dots in the cell’s cytoplasm surrounding the nucleus) that initiates and carries out apoptosis. The more precisely researchers can define the steps in apoptosis, the better they’ll understand how some cells escape programmed death to cause cancer, chronic inflammation and autoimmune disorders. They can also find out how out-of-control cell death might contribute to illnesses such as Alzheimer’s or Parkinson’s disease.
Zombie Cells 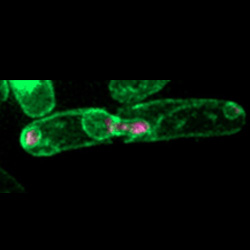 Cells that continue living even after their DNA has been severely damaged have been nicknamed “zombie cells.” These cells can arise when DNA damage that occurs during cell division eludes detection by checkpoints that would normally halt division. In this photograph of a dividing yeast cell, DNA (stained pink in the middle and far left) inside the cell nucleus (outlined in green in the center) has broken apart and separated unevenly, forming several small nuclei in the cell. Cells that result from such divisions have partial or duplicated genetic information, which is often associated with cancer. By studying the mechanisms that lead to zombie cells, scientists can find clues for how to prevent their formation.
Glowing Bacteria 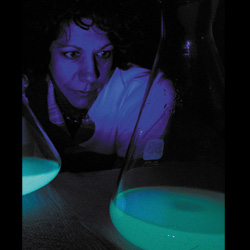 Some bacteria produce light in certain conditions. When Vibrio harveyi marine bacterial cells form a sufficiently large group, they glow blue-green. This is part of a chemical mechanism called quorum sensing that lets the cells communicate with each other. Researchers, such as Bonnie Bassler shown here looking at a flask of the glowing bacteria, use sophisticated molecular and biochemistry methods to listen in on the “conversations.” In this way, scientists can learn how these microbes synchronize behaviors, such as releasing toxins, triggering disease and evading the human immune system.