Here are some images from our gallery that remind us of the winter holidays—and showcase important findings and innovations in biomedical research. 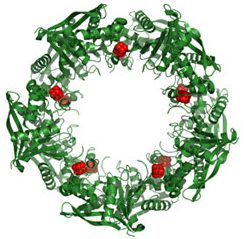 This wreath represents the molecular structure of a protein, Cas4, which is part of a system, known as CRISPR, that bacteria use to protect themselves against viral invaders. The green ribbons show the protein’s structure, and the red balls show the location of iron and sulfur molecules important for the protein’s function. Scientists have harnessed Cas9, a different protein in the bacterial CRISPR system, to create a gene-editing tool known as CRISPR-Cas9. Using this tool, researchers can study a range of cellular processes and human diseases more easily, cheaply and precisely. Last week, Science magazine recognized the CRISPR-Cas9 gene-editing tool as the “breakthrough of the year.” 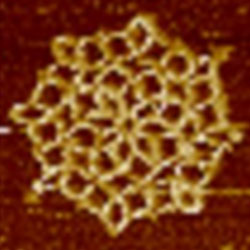 Researchers made this snowflake pattern from DNA. They used a method called DNA origami that takes advantage of DNA’s natural folding property. To create this and other DNA origami shapes, the researchers combined computer- and molecular biology-based methods to twist a DNA strand into the desired structure. The DNA origami design strategy could one day be used to engineer biomedical materials capable of delivering medicines to where they’re needed in the body. 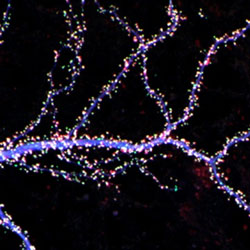 Like tree limbs wrapped in lights, branches of this nerve cell (neuron) from a rat’s brain are covered with dendritic spines (bright dots). In both humans and animals, dendritic spines connect neurons with each other to help transmit nerve signals. The spines are also involved in storing memories in the brain. Losing some dendritic spines is normal as the brain matures from childhood to adulthood. However, excessive loss later in life can accompany diseases that impair memory and cognition. 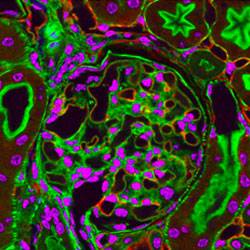 Like a fruitcake that contains many different ingredients, our tissues contain different structures that perform specialized functions. This image of a mouse kidney shows some of the structures that help the organ clear waste from the body. The large, round structure taking up much of the center is a glomerulus, which filters unneeded molecules from the bloodstream. Researchers have been studying the glomerulus and other kidney structures to better understand this crucial organ and to develop treatments for diseases that affect it. 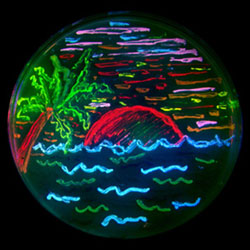 Wishing for a tropical holiday getaway? This vacation-inspired scene shows different strains of bacteria in a petri dish. Each strain produces one of eight proteins that glow in different colors when exposed to ultraviolet light. Scientists use these fluorescent proteins as markers to help them see the activity of a gene, the location of a particular protein and much more. Green fluorescent protein, which occurs naturally in jellyfish, has become a standard visualization tool in labs worldwide (the researchers who discovered and developed it for use in research received the 2008 Nobel Prize in chemistry). By simultaneously using multiple fluorescent proteins, scientists can study different molecules at once to better understand their roles in complex biological processes.

One Reply to “Cool Images: A Holiday-Themed Collection”