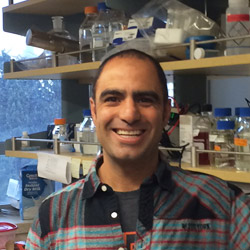 His story begins in Montana, where he grew up and now lives. Always exploring different interests, Wiedenheft decided in his final semester at Montana State University (MSU) in Bozeman to volunteer for Mark Young, a scientist who studies plant viruses. Even though he majored in biology, Wiedenheft had spent little time in a lab and hadn’t even considered research as a career option.

At the time, Young and his colleague, materials scientist Trevor Douglas, were thinking about viruses in a new way. They wanted to use viral particles, which have a casing that surrounds their genetic material, as tiny cages to contain and promote chemical reactions that could lead to new kinds of nanomaterials.

Having two such enthusiastic scientists find ways to merge their fields, Wiedenheft says, created excitement in the lab. “The creativity of my mentors left a lasting impression on me that I work hard to emulate.”

Wiedenheft stayed in Young’s lab the summer after graduating. But he still was unsure what career he really wanted to pursue.

So, he tested out other jobs. Aboard a vessel in the Bering Sea off Alaska, Wiedenheft collected data about crabbing catches for state fishery agencies. Fish and wildlife work was familiar to him—his dad was part of the Montana Fish, Wildlife and Parks department. Wiedenheft then ventured farther around the globe to teach basic science to young students in Ghana, West Africa. He returned to Montana, where he worked as a ski patroller, controlling avalanches and responding to emergencies.

During all these experiences, he found himself poring over his old biology textbooks in his spare time. His curiosity led to so many more questions, he recalls. Wiedenheft realized he had caught Young’s infectious passion for science.

Still inspired by his mentor, he returned to the Young lab to pursue a Ph.D. in microbiology. His mentor had started a project to study life forms in extreme environments like the boiling acid hot springs in Yellowstone National Park in Montana and neighboring Wyoming.

Wiedenheft collected samples from the springs at Yellowstone, then cultured them in the lab to learn what bacteria and archaea were present in the samples. He then focused on finding viruses that could infect the heat-loving microbes. To figure out how the viruses succeeded in invading their hosts, Wiedenheft sequenced the viral DNA to identify proteins involved in the process.

While studying the viruses’ tricks, Wiedenheft also began thinking about how the bacteria evade them. Then, by coincidence, a 2007 research paper reported on an “adaptive immune system” that protects bacteria from viral invaders. The paper pointed to a way that microbes might fight back against viruses. 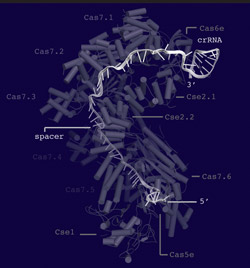 This response system, abbreviated CRISPR, allows a bacterium to disarm a virus when it attacks again. Bacterial protein machinery use pieces of viral DNA as unique identifiers to recognize and chop up the returning virus.

Wiedenheft’s interest in CRISPR was piqued. After earning his Ph.D., he joined the lab of Jennifer Doudna at the University of California, Berkeley, which plays a leading role in CRISPR research. Wiedenheft and others in the lab determined the structures of CRISPR-associated protein machines, helping to reveal some of the many complexities of this powerful bacterial defense system.

CRISPR promised a massive intellectual adventure that Wiedenheft was eager to be part of. Scientists were adapting CRISPR as a tool to add, delete, rev up or tone down certain genes as well as create animal models for studying human diseases. The ability to precisely target genes in human cells could also speed progress in the development of gene-based therapies.

To his delight, a grant from NIGMS’ Institutional Development Award (IDeA) program helped Wiedenheft come back to MSU to start his own lab and once again enjoy the Montana mountains he had missed while exploring the world inside and outside of science.

With his own research team in place, his lab’s efforts soon bore fruit. In 2014, Wiedenheft and his colleagues published the structure of Cascade, a sea horse-shaped protein in the CRISPR system that detects invading viral DNA. The identification of the Cascade structure represented another crucial step in finding out how CRISPR recognizes and stymies viral invaders.

More recently, Wiedenheft and a graduate student in his lab teamed up with researchers at Cornell University and Johns Hopkins University to understand how bacterial immune systems differentiate between the bacterium’s own genetic material and that of the virus. Their findings were published earlier this year in Nature.

“Targeting the foreign DNA stored in the bacterial genome would result in an auto-immune reaction that would kill or at least make the bacteria very sick,” Wiedenheft says in a news release about the study.

As Wiedenheft and others deepen our understanding of CRISPR, many scientists have rapidly embraced the system as a research tool. Wiedenheft’s colleagues at MSU, for example, are using it to define the jobs certain molecules perform during acute and chronic inflammation and to study microbes in the human gut.

Wiedenheft notes that his story of finding a passion for science is not unusual. Letting students experience science in the lab or in the field, he says, shows them the creativity and gusto of doing scientific research.

Wiedenheft learned first-hand that giving students a chance to do research in the lab brings classroom lessons to life and can instill a passion for science. And this is advice he lives by—five members of his 12-person research team are undergraduates.

As the inaugural speaker for the NIGMS Director’s Early Career Investigator Lecture series on April 13, 2016, Wiedenheft will describe his cutting-edge research during a short presentation and then answer questions related to his career path. Students can submit questions or comments before or during the lecture on Twitter using the hashtag #ecilecture or via email to Jilliene Drayton. For more details, see the New Early Career Investigator Lecture for Undergraduate Students post on the other NIGMS blog.