When you think of blood, chances are you think of the color red. But blood actually comes in a variety of colors, including red, blue, green, and purple. This rainbow of colors can be traced to the protein molecules that carry oxygen in the blood. Different proteins produce different colors.

END_OF_DOCUMENT_TOKEN_TO_BE_REPLACED

The first known descriptions of cancer come from ancient Egypt more than 3,500 years ago. Early physicians attributed the disease to several factors, including an imbalance in the body’s humoral fluids, trauma, and parasites. Only in the past 50 years or so have we figured out that mutations in critical genes are often the trigger. The sea lamprey, a slimy, snake-like blood sucker, is proving to be an ideal tool for understanding these mutations.

The sea lamprey, often called the jawless fish, is an ancient vertebrate whose ancestor diverged from the other vertebrate lineages (fish, reptiles, birds and mammals) more than 500 million years ago. Jeramiah Smith,

associate professor of biology at the University of Kentucky, has discovered that lamprey have two separate genomes: a complete genome specific to their reproductive cells, consisting of 99 chromosomes (humans have 23 pairs) and another genome in which about 20 percent of genes have been deleted after development. Using the lamprey model, Smith and his colleagues have learned that many of these deleted genes—such as those that initiate growth pathways—are similar to human oncogenes (i.e., cancer-causing genes).

END_OF_DOCUMENT_TOKEN_TO_BE_REPLACED 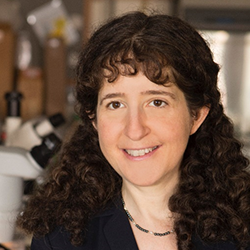 surveyed the Princeton University lab where she’d worked for 22 years. She and her team members had spent many hours that day laboriously affixing yellow Post-it notes to the laboratory equipment—microscopes, centrifuges, computers—they would bring with them to Columbia University, where Landweber had just been appointed full professor. Each Post-it specified the machinery’s location in the new lab. Items that would be left behind—glassware, chemical solutions, furniture, office supplies—were left unlabeled.

As Landweber viewed the lab, decorated with a field of sunny squares, her thoughts turned to another sorting process—the one used by her primary research subject, a microscopic organism, to sift through excess DNA following mating. Rather than using Post-it notes, the creature, a type of single-celled organism called a ciliate, uses small pieces of RNA to tag which bits of genetic material to keep and which to toss.

Landweber is particularly fond of Oxytricha trifallax, a ciliate with relatives that live in soil, ponds and oceans all over the world. The kidney-shaped cell is covered with hair-like projections called cilia that help it move around and devour bacteria and algae. Oxytricha is not only bizarre in appearance, it’s also genetically creative.

Unlike humans, whose cells are programmed to die rather than pass on genomic errors, Oxytricha cells appear to delight in genomic chaos. During sexual reproduction, the ciliate shatters the DNA in one of its two nuclei into hundreds of thousands of pieces, descrambles the DNA letters, throws most away, then recombines the rest to create a new genome.

Landweber has set out to understand how—and possibly why—Oxytricha performs these unusual genomic acrobatics. Ultimately, she hopes that learning how Oxytricha rearranges its genome can illuminate some of the events that go awry during cancer, a disease in which the genome often suffers significant reorganization and damage.

Oxytricha carries two separate nuclei—a macronucleus and a micronucleus. The macronucleus, by far the larger of the two, functions like a typical genome, the source of gene transcription for proteins. The tiny micronucleus only sees action occasionally, when Oxytricha reproduces sexually. 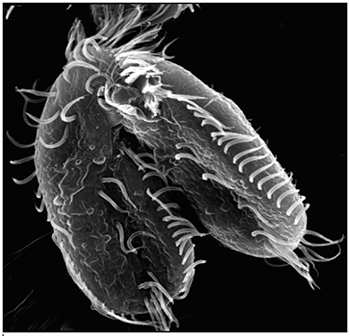 What really makes Oxytricha stand out is what it does with its DNA during the rare occasions that it has sex. When food is readily available, Oxytricha procreates without a partner, like a plant grown from a cutting. But when food is scarce, or the cell is stressed, it seeks a mate. When two Oxytricha cells mate, the micronuclear genomes in each cell swap DNA, then replicate. One copy of the new hybrid micronucleus remains intact, while the other breaks its DNA into hundreds of thousands of pieces, some of which are tagged, recombined, then copied another thousand-fold to form a new macronucleus. END_OF_DOCUMENT_TOKEN_TO_BE_REPLACED

That’s me and some other zebrafish, swimming in a tank in one of the more than 600 labs around the world that use us to study embryo development, genetics, and all kinds of human diseases. Credit: Wikimedia Commons, Azul.

Apart from the tell-tale stripes that give me my nickname, zebrafish, I look a lot like your standard minnow swimming in the shallows of any pond, lake, or river. But I like to think I’m more important than that. In fact, researchers around the world have turned to me and my extended family to understand some of the most basic mysteries of life. From studying us, they’re learning about how embryos develop, how cancer works, and whether someday humans might be able to rebuild a heart, repair a spinal cord injury, or regrow a severed limb.

Why us? Because zebrafish are pretty special and researchers think we’re easy to work with. First, unlike your standard lab mouse or rat, we lay lots of eggs, producing baby fish that grow up fast. We develop outside our mothers and go from egg to embryo to free-swimming larva in just 3 days (check out this video

of how we grow, cell by cell, during the first 24 hours). Within 3 months, we’re fully mature.

Not only do zebrafish moms have many babies at the same time, and not only do these babies grow up quickly, but our eggs and embryos are see-through, so scientists can literally watch us grow one cell at a time. We stay mostly transparent for a few weeks after hatching. That makes it super easy for scientists to monitor us for both normal and abnormal development. In fact, scientists have learned how to turn off the genes that give our skin its color. These zebrafish, named casper, after the “friendly ghost” of cartoon fame, stay semi-transparent, or translucent, through adulthood.

And last, but certainly not least, did I mention that we can regenerate? If parts of my body are damaged, even to a significant degree, they can regrow. This holds true for my heart, fins, spinal cord, and even brain tissue. Our regenerative capacity is seemingly unlimited; my caudal fin, for example, can grow back dozens of times. END_OF_DOCUMENT_TOKEN_TO_BE_REPLACED

If you’ve ever been to the beach and walked around the rocks during low tide, you’ve probably seen a sea urchin. You may not have known that sea urchins found along the Pacific shore can live for more than 100 years. What’s even cooler is that, as they age, they don’t seem to lose their abilities to reproduce or regenerate damaged body parts. While different species of sea urchins have varying life expectancies, they all seem to share fountain-of-youth characteristics. For these and other reasons, scientists study sea urchins to investigate aging and other basic life processes. END_OF_DOCUMENT_TOKEN_TO_BE_REPLACED 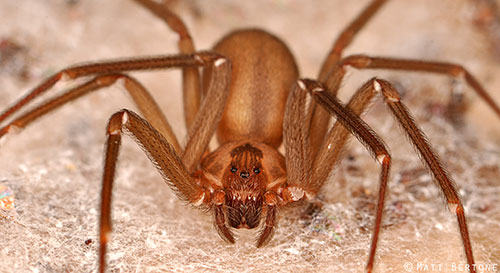 More than 46,000 species of spiders creepy crawl across the globe, on every continent except Antarctica. Each species produces a venom composed of an average of 500 distinct toxins, putting the conservative estimate of unique venom compounds at more than 22 million. This staggering diversity of venoms, collectively referred to as the venome, has only begun to be explored. END_OF_DOCUMENT_TOKEN_TO_BE_REPLACED 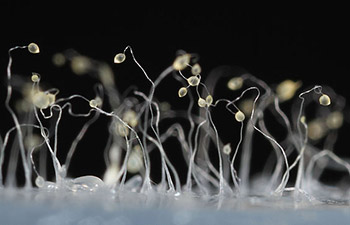 While researchers have been racing the genetically souped-up microbes at annual events for a few years—another competition is scheduled for October 26—scientists have been studying conventional Dictyostelium for decades to investigate other important basic life processes including early development, gene function, self/non-self recognition, cell-type regulation, chemical signaling and programmed cell death. END_OF_DOCUMENT_TOKEN_TO_BE_REPLACED 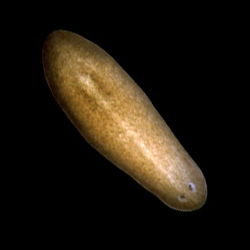 The planarian has a power few creatures can match. Remove its head, its tail or nearly any of its body parts, and this aquatic flatworm will simply grow it back. Humans can’t do that, of course. And yet many of the genes that help the planarian regenerate are also found in us. To learn more about this tiny marvel, we “interviewed” a representative. END_OF_DOCUMENT_TOKEN_TO_BE_REPLACED