Although invisible to our immune system’s antibodies, strains of a pneumonia-causing bacteria, Pseudomonas aeruginosa (orange), are easily detected by galectins. Credit: Centers for Disease Control and Prevention.

A team of scientists led by Richard Cummings of Emory University found that galectins, a class of proteins naturally produced by our bodies, can identify and kill these concealed bacteria without damaging our own mimicked cells. To make this discovery, the team used glass slides covered with more than 300 different carbohydrates extracted from the surface of bacterial cells. After testing the ability of galectins and antibodies to bind to specific carbohydrates on these slides, the researchers observed that the galectins easily detected the mammalian-like carbohydrates that the antibodies failed to recognize.

These findings provide a clearer understanding of the complementary roles played by galectins and antibodies in protecting us from a broad range of infections.

This work also was funded by NIH’s National Institute of Allergy and Infectious Diseases and National Heart, Lung, and Blood Institute. 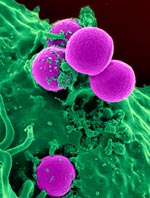 Antibiotic-resistant strains of Staphlyococcus aureus bacteria (purple) have become the most common cause of skin infections seen in hospital emergency departments. Credit: NIH’s National Institute of Allergy and Infectious Diseases.

In the United States alone, at least 2 million people each year develop serious infections with bacteria that have become resistant to the antibiotics we use to combat them, and about 23,000 die, according to the Centers for Disease Control and Prevention. Antibiotic resistance can turn once-manageable infections into “superbug” diseases that are difficult—and sometimes impossible—to treat.

Scientists funded by the National Institutes of Health are studying many aspects of antibiotic resistance, including how it spreads. Read this Inside Life Science article for just a few research examples and how the work could aid efforts to curb the emergence of resistance. 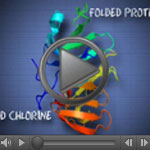 Exposure to hypochlorous acid causes bacterial proteins to unfold and stick to one another, leading to cell death. Credit: Video segment courtesy of the American Chemistry Council. View video

Spring cleaning often involves chlorine bleach, which has been used as a disinfectant for hundreds of years. But our bodies have been using bleach’s active component, hypochlorous acid, to help clean house for millennia. As part of our natural response to infection, certain types of immune cells produce hypochlorous acid to help kill invading microbes, including bacteria.

Researchers funded by the National Institutes of Health have made strides in understanding exactly how bleach kills bacteria—and how bacteria’s own defenses can protect against the cellular stress caused by bleach. The insights gained may lead to the development of new drugs to breach these microbial defenses, helping our bodies fight disease. 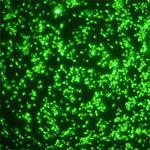 What looks like an abstract oil painting is actually an image of several cholera-causing V. cholerae bacterial communities. These communities, called biofilms, include productive and exploitive microbial members. The industrious bacteria (yellow) tend to thrive in denser biofilms (top) while moochers (red) thrive in weaker biofilms (bottom). In an effort to understand this phenomenon, Princeton University researchers led by Bonnie Bassler

discovered two ways the freeloaders are denied food. They found that some V. cholerae cover themselves with a thick coating to prevent nutritious carbon- and nitrogen-containing molecules from drifting over to the scroungers. In addition, the natural flow of fluids over biofilms can wash away any leftovers. Encouraging such bacterial fairness could boost the efficient breakdown of organic materials into useful products, such as biofuels. On the other hand, counteracting it could lead to better treatment of illnesses, like cholera, by starving the most productive bacteria and thereby weakening the infection. , condenses 6.5 minutes into less than a minute to show how the toxin, called melittin, destroys an animal or bacterial cell.

What looks like a red balloon is an artificial cell filled with red dye. Melittin molecules are colored green and float on the cell’s surface like twigs on a pond. As melittin accumulates on the cell’s membrane, the membrane expands to accommodate it. In the video, the membrane stretches into a column on the left.

When melittin levels reach a critical threshold, countless pinhole leaks burst open in the membrane. The cell’s vital fluids—red dye in the video—leak out through these pores. Within minutes, the cell collapses.

Many organisms use such a pore-forming technique to kill attacking bacterial cells. This research reveals molecular-level details of the strategy, bringing pharmaceutical scientists a step closer to harnessing it in the design of new antibiotics.